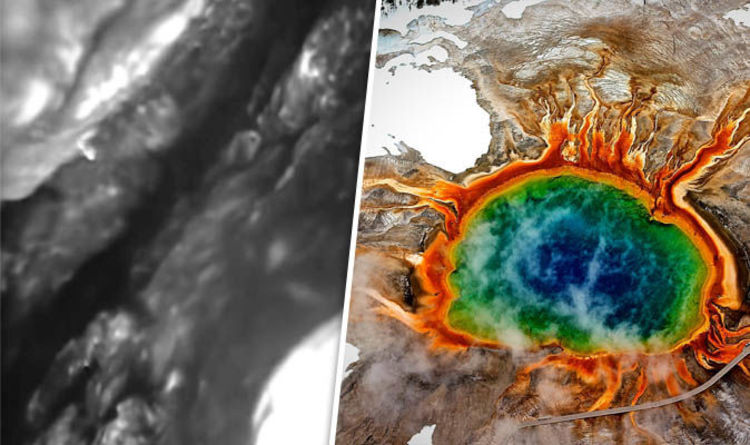 Between November 5 and November 11, three groups of scientists will lower equipment into Old Faithful’s thermal vents to a number of measurements.

The Yellowstone study is the first of its kind since the early 1990s, when scientists dropped cameras into the geyser.

The spectacular footage dubbed A Short Voyage Towards the Centre of the Earth, which you can watch here, shows the intricate thermal tunnel of Old Faithful about 22ft below ground.

The United States Geological Survey (USGS) said: “The footage revealed a constriction in Old Faithful’s conduit 22 feet down, which may trap steam and water and build pressure for a geyser eruption.

“A more recent study utilised an array of small portable seismometers to map the ground beneath Old Faithful.

“The researchers discovered a reservoir below the ground several hundred feet west of the geyser and that contains about 79 million gallons of hot water.”

This month, geologists from the Universities of Wyoming, Utah, New Hampshire and Montana State University will once again examine the geyser.

READ MORE: Yellowstone volcano eruption: What does the Bible say about Yellowstone erupting?

One team of scientists will collect silica sinters – mineral deposits – and other rock samples in order to determine their chemical compositions and age.

The second team of geologists will focus on Yellowstone volcano’s geohydrobiology.

The USGS said: “They will take a variety of geophysical measurements around the geyser, such as electrical resistivity, nuclear magnetic resonance, and seismic refraction.

The third group of volcano experts will retrieve a number of small seismometers deployed around Geyser Hill in September.

The seismic measurement tools were deployed in response to rapid landscape shifts in the area, following rare water eruptions at Ear Spring Geyser.

If you are lucky enough, the USGS teased you might be able to spot some of the scientists working around Yellowstone’s geysers between now and November 16.

You can tune in to the Yellowstone geysers webcam live by clicking here.

Yellowstone volcano is one of the biggest and most active supervolcanoes in the world and it occupies a corner of the Western US.

The supervolcano is constantly monitored through a combined effort of the YVO, the USGS and a number of geology-focused universities.

Yellowstone volcano is believed to have last erupted between 64,000 and 70,000 years ago.

We May Finally Know How Lightning Gets Its Zigzag Shape : ScienceAlert
When Corals Sleep For The Winter, Their Microbiome Restructures Itself : ScienceAlert
This Vending Machine in Ohio Has The Power to Save Lives. Here’s How : ScienceAlert
Small Lakes Keep Growing Across The Planet, And It’s a Serious Problem : ScienceAlert
The Last Known Tasmanian Tiger Was Just Found in a Museum Cupboard : ScienceAlert