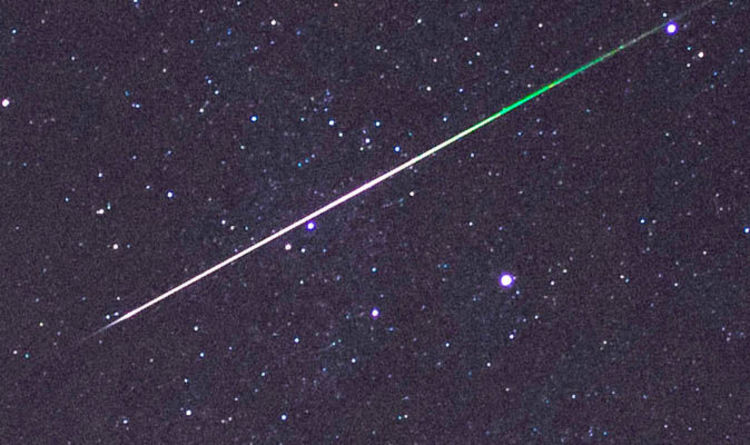 
The Leonid meteor shower is counted among the more prolific showers, breaking out each year in November.

Leonids zip across the night skies when the Earth crosses the orbital path of Comet Temple-Tuttle.

The shooting stars are the cosmic remnants and debris left behind the giant space rock as it barrels around the Sun.

On the night of the shower’s peak, the Leonids build in intensity, dazzling sky gazers with an unforgettable performance of nature’s showmanship.

When is the Leonid meteor shower peak?

The shower will be most intense this weekend but the full range of activity falls between November 15 and November 20.

Even if you miss the shower on the night of the peak, you should still be able to see a number of shooting stars on the days leading up to and after the peak.

Occasionally the Leonids produce a so-called Leonid Storm when hundreds or even thousands of meteors criss-cross the sky.

Meteor showers occur about every 33 years and this year astronomers are not expecting one to occur.

What is the best time to see the Leonid meteor shower?

As with most major meteor showers, the Leonids are best viewed between midnight and the early pre-dawn house when the skies are pitch black.

Astronomer Deborah Byrd, of EarthSky.org, suggests looking out for the meteors early in the morning or after the Moon has set.

Unfortunately for meteor hunters, a bright Moon on the night of the peak might hinder viewing condition somewhat.

Ms Byrd said: “In 2018, the peak night of the shower is expected from midnight to dawn on Saturday and Sunday mornings – November 17 and 18.

“Although a bright Waxing Gibbous Moon will be out for much of the night on the peak dates, try watching this shower during the predawn hours, or after the moon has set.”

How to see the Leonid meteor shower this month?

This means there will be no need for your telescope or binoculars on the night of the peak. Instead, trust your own two eyes.

The Royal Observatory Greenwich said: “Hunting for meteors, like the rest of astronomy, is a waiting game, so it’s best to bring a comfy chair to sit on and to wrap up warm as you could be outside for a while.

“They can be seen with the naked eye so there’s no need for binoculars or a telescope, though you will need to allow your eyes to adjust to the dark.”

Your eyes should take no more than 20 to 30 minutes to adjust to the dark.

Where to see the Leonid meteor shower peak?

On the night of the meteor shower’s peak, if you trace the shooting stars across the sky, they will appear to radiate from a point near the constellation of Leo – their namesake.

But meteors breaking out into the atmosphere are known to fly in all sorts of directions, meaning it is best not to look for their radiant point.

Instead, find a quiet and dark spot with an unobstructed view of the night sky.

Ms Byrd said: “We hear lots of reports from people who see meteors from yards, decks, streets and especially highways in and around cities.

“But the best place to watch a meteor shower is always in the country.