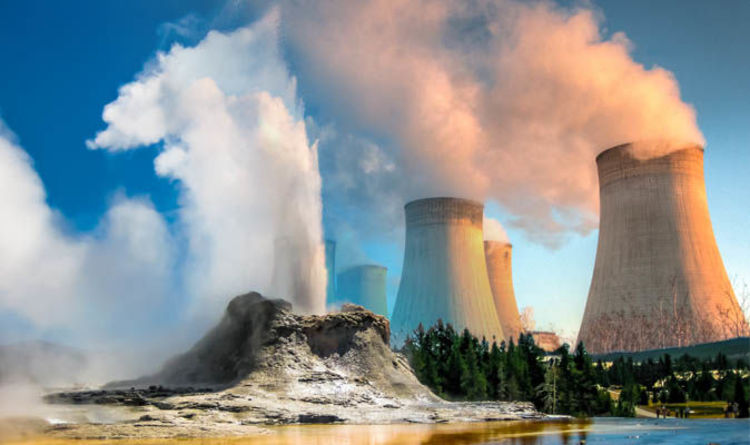 
The Yellowstone National Park is home to some 10,000 scolding hot springs and geysers dotting the wild landscape.

The bubbling sulphuric springs are evidence of intense magmatic activity deep beneath the surface of Yellowstone.

One of the biggest pressing issues concerning Yellowstone is the possibility of the supervolcano complex erupting in the near future.

But the magmatic activity also presents the possibility of harvesting the raw geothermal power for the bettering of mankind.

A 2017 study carried out by scientists at NASA’s Jet Propulsion Laboratory (JPL) suggested this scenario could be a reality with current technology.

The startling discovery was made after the JPL looked at different ways it could prevent a cataclysmic super-eruption in the future.

Yellowstone volcano is estimated to have last erupted some 640,000 years ago.

One of the magma pools stretches roughly five to 17 km below the surface of the national park and is about 40 km wide and 90 km long.

The second magma chamber is found between 20 and 50 km underground and is about 4.5 times larger than the first chamber.

In 2017, NASA’s scientists questioned whether or not drilling down to these chambers and pumping them full of cold water could prevent an imminent eruption.

Past eruptions of the volcanic complex have been catastrophic enough to cover the continental US with ash and smoke.

A future eruption on this scale would spew thousands of cubic kilometres of hot rock and ash and possibly even trigger a global volcano winter.

As a by-product of the 2017 study, the NASA scientists claimed they might be able to prevent such a global cataclysm and generate power while doing so.

The researchers found the geothermal energy harvested from the supervolcano’s magma chambers could be enough to power the entire country.

The NASA scientists suggested a ring of 160 injection wells and 160 production wells could drain the Yellowstone magma chambers of heat and generate electricity in less than 50,000 years.

The scientists concluded: “Thus we can anticipate that an Enhanced Geothermal System extracting 20GW from the perimeter of a supervolcano could generate 3.46 GW of electrical power for a cost of $3.46 billion, delivering power at under – perhaps well under – $0.10/kWh, even if the entire length of the holes must be drilled through rock as hard as granite.”

But there is a major obstacle in the way of anyone hoping to tap into this amazing source of power.

In 1970 a US Federal Law known as the Geothermal Steam Act placed a number of restrictions on the leasing of geothermal steam resources found on public lands.

The law outright prohibits private companies from tapping into geothermal sources on US Fish and Wildlife Service administered lands.

The Steam Act directly stipulates “the entire park unit is listed as a significant thermal feature” meaning Yellowstone National Park will remain unspoiled for many years to come.

The USGS said “Although Yellowstone and its surroundings are a significant geothermal resource, the Park itself is off limits to development.

“Because geothermal developments often cause a decrease in flow of nearby hot springs and other geothermal features, like geysers, it is questionable whether anyone could get permission to develop geothermal energy in the region outside the park.”

There are other sources of harvested geothermal energy outside of Yellowstone such as the The Geysers, Salton Sea, Coso, and Casa Diablo power plants in California.

These power plants alone are powerful enough to provide millions of Americans with power and more can be found dotted around Nevada, Utah and Hawaii.

It Turns Out There Is Such a Thing as Good Gossip, According to New Research : ScienceAlert
Shimmering ‘Lakes’ Under The South Pole of Mars Might Be Something Else Entirely : ScienceAlert
Long COVID Is Still Raising More Questions Than Answers, Say Researchers : ScienceAlert
Weight Lifting in Old Age Does More Than Just Keep Your Muscles Strong : ScienceAlert
Amazing New Fossils Provide Earliest Known Traces of The Evolution of Our Jaws And Limbs : ScienceAlert