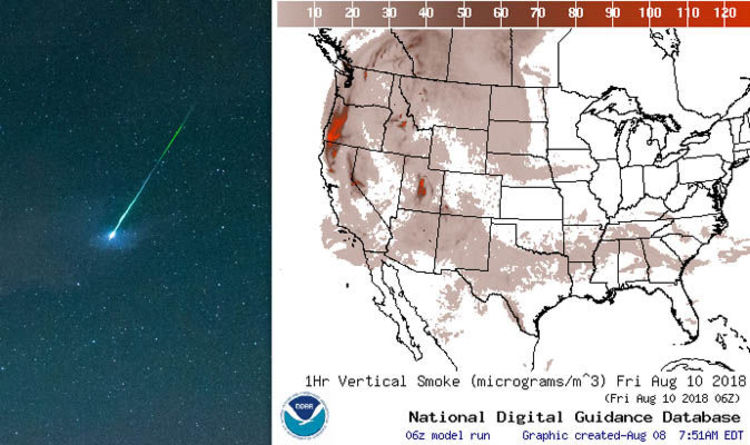 
The largest Californian wildfire in the history of the US rages on as the annual Perseid meteor shower approaches its peak.

The Perseids will peak in intensity this weekend in the late night to pre-dawn hours between Saturday, August 11, to Monday, August 13.

Astronomers expect anywhere between 50 and 60 meteors to burst out into the night skies during this year’s peak.

However, the thick and billowing smoke rising from California could make viewing condition troublesome for some US-based stargazers.

The Perseids are best seen in clear and cloudless skies with little to no moonlight drowning out the spectacle.

This year the New Moon phase promises to keep the skies moonless but the threat of wildfire smoke throws a spanner into the works.

He said: “Although clouds will be largely absent across the western United States, smoke from wildfires burning across the region will create hazy condition, limiting visibility near and downwind of the fires.

“Similar sky condition are on tap for much of North America on Sunday night as clouds and rain continue to plague the southern and eastern US and wildfire smoke lingers over the Western US.”

Since a number of wildfires broke out across California over the course of July, hundreds of thousands of acres of land have been consumed.

The California Department of Forestry and Fire Protection (Cal Fire) revealed the most devastating of the fires, dubbed Carr Fire, has covered 176,069 acres as of Wednesday, August 8.

The nearby Ranch Fire in Mendocino County has burned around 253,166 acres and River Fire has consumed 48,920 acres of land.

The dark red hotspots in the map show great amounts of smoke in California, Utah and even further up north in Canada.

Be sure to check your local weather forecast at least two days in advance of the Perseid meteor shower peak.

But if you are far away from the dangerous California fires then you are in for a truly mesmerising spectacle this weekend.

He said: “My best advice if you’re trying to see meteors is to lay back and get as much of the sky in your view as possible.

“As with any meteor shower, you need patience. Plan on making an evening out of it and stay out for at least one hour.”

A Stunning New 3D Model of The Cat’s Eye Nebula May Help Us Solve Its Mysteries : ScienceAlert
We Have Our First Look at Neptune’s Rings in 33 Years, And They’re Glorious : ScienceAlert
Does IQ Decline as We Age? One Type of Intelligence Peaks in Your Twenties : ScienceAlert
Experiment Reveals What 1 Hour in Nature Does to The Human Brain : ScienceAlert
The Real Reason For Using Flight Mode Is Not What You Think : ScienceAlert