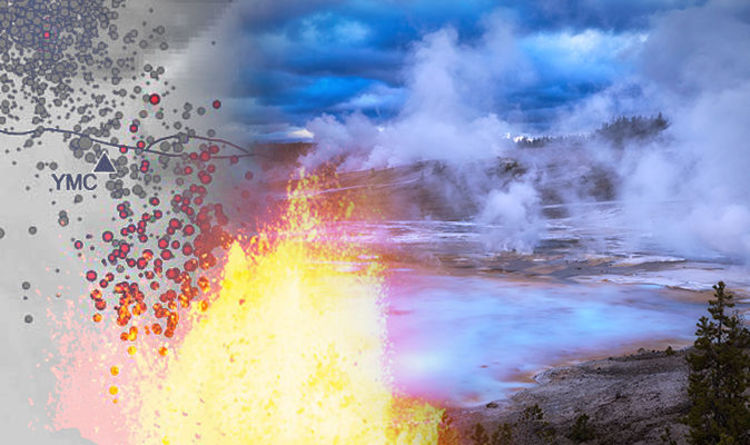 
More than 200 earthquakes have rocked Yellowstone National Park in recent days, home to the largest super volcano in the USA.

On Sunday, a 3.1 magnitude earthquake was recorded 12km north-east of West Yellowstone, while the largest activity inside the park reached 2.9 magnitude.

What will happen if Yellowstone explodes?

A giant eruption at Yellowstone National Park could impact the world’s global climate for years afterwards – even decades – according to the USGS.

On its website, it says: “Such a giant eruption would have regional effects such as falling ash and short-term (years to decades) changes to global climate.

“The surrounding states of Montana, Idaho, and Wyoming would be affected, as well as other places in the United States and the world.

“Such eruptions usually form calderas, broad volcanic depressions created as the ground surface collapses as a result of withdrawal of partially molten rock (magma) below.

“Fortunately, the chances of this sort of eruption at Yellowstone are exceedingly small in the next few thousands of years.”

Yellowstone is known to have erupted violently several times in the last two million years and the geology of the landscape, including lava flows and rock formations, is formed from these huge explosions.

The Yellowstone Plateau volcanic field has spanned three volcanic cycles during this time and includes two of the world’s largest-known eruptions, according to USGS.

Major eruptions are incredibly rare. USGS said Yellowstone’s current earthquake swarm account for more than more than 50 percent of the seismic activity at Yellowstone, and no volcanic activity has occurred from any past such events”.

But Brian Wilcox, an ex-member of NASA Advisory Council on Planetary Defence, has previously warned that the supervolcano threat posts a bigger risk to life than an asteroid hurtling to earth.

In an interview last year with the BBC, he said: “Yellowstone explodes roughly every 600,000 years, and it is about 600,000 years since it last exploded, which should cause us to sit up and take notice.”

Newly Discovered Fossil Reveals Hundreds of Teeth ‘Never Seen Before in a Pterosaur’ : ScienceAlert
Our Body Temps Have Been Dropping For 160 Years. Gut Microbes May Be Playing a Role : ScienceAlert
There’s a ‘Lost City’ Deep in The Ocean, And It’s Unlike Anything We’ve Ever Seen : ScienceAlert
Dogs Can Be Aggressive For Lots of Reasons, And One of Them Is You : ScienceAlert
Lightning Strikes Create a Strange Form of Crystal Rarely Seen in Nature : ScienceAlert