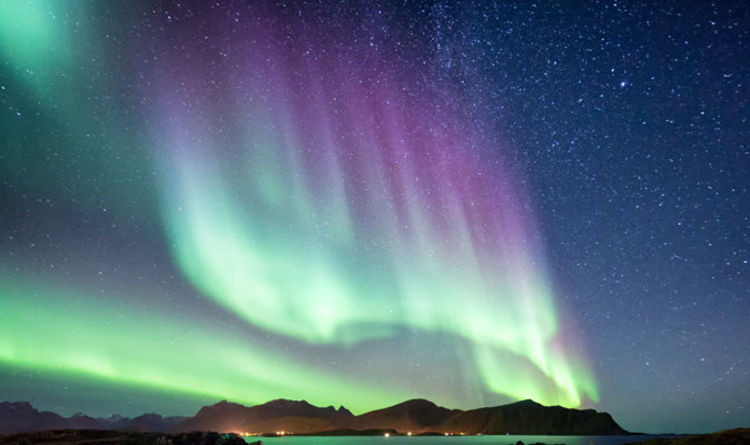 
While the aurora borealis and australis, also known as the Northern and Southern Lights, have been well studied and scientists know they are created by solar particles and high energy radiation hitting the Earth’s magnetic bubble, it has been unclear what causes pulsating auroras.

Pulsating auroras are only really seen near the poles, and light up the sky with brief pulses of green, purple and red.

However, research uncovered by NASA’s Time History of Events and Macroscale Interactions during Substorms (THEMIS) mission and Japan’s Exploration of energization and Radiation in Geospace (ERG) satellite may have finally solved the mystery.

The US space agency says the pulsating lights are caused by plasma in the magnetosphere which disturb electrons that arrive from outer space, creating the brief, pulsating glow.

NASA said: “The magnetosphere is home to a type of plasma wave known as whistler mode chorus.

These waves have characteristic rising tones — reminiscent of the sounds of chirping birds — and are able to efficiently disturb the electrons.

“When these waves make their appearance within the magnetosphere, some of the electrons scattered by the wave careen down into Earth’s atmosphere, causing the pulsating auroras.

“The multipoint observations from the ERG satellite and ground-based all-sky cameras from the THEMIS mission allowed scientists to pinpoint the cause and effect, seeing the event from start to end.

“Chorus waves have been observed around other planets in the solar system, including Jupiter and Saturn.

“Likely, the processes observed around Earth can help explain auroral features on these gas giants as well as on planets around other stars.

“The results also help scientists better understand how plasma waves can influence electrons — something that occurs in processes across the universe.”

Bacteria Can Use Plastic Waste as a Food Source, Which Isn’t as Good as It Sounds : ScienceAlert
Physicists Break Record Firing a Laser Down Their University Corridor : ScienceAlert
An Iceberg The Size of London Has Broken Free From Antarctica Ice Shelf : ScienceAlert
This Physicist Says Electrons Spin in Quantum Physics After All. Here’s Why : ScienceAlert
One Simple Idea Makes It Much Easier to Manage Your Weight Over Time : ScienceAlert