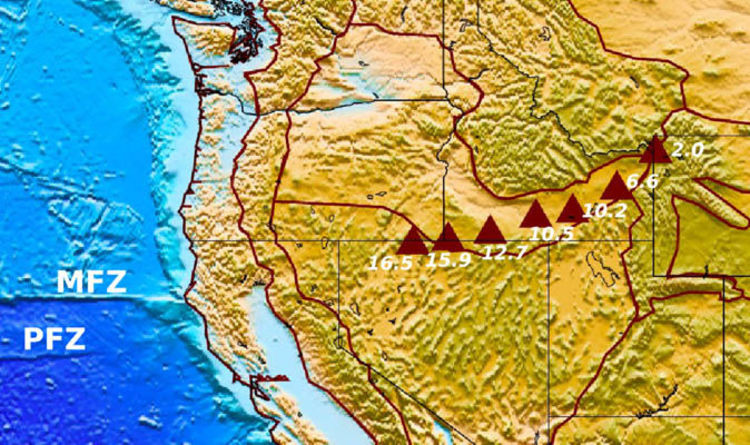 
Scientists studying the Yellowstone supervolcano caldera have uncovered a shocking new source of volcanism beneath the national park.

Geologists from the Virginia Polytechnic Institute and State University (Virginia Tech) believe Yellowstone is powered by a gigantic ocean plate beneath the Western United States.

Until recently, scientists believed Yellowstone sourced its power directly from the Earth’s core like the erupting Kilauea volcano in Hawaii.

But a new study published in the journal Nature Geoscience by Ying Zhou, an associate professor at Virginia Tech, shows a different history of Yellowstone volcanism.

Professor Zhou said: “In this research, there was no evidence of heat coming directly up from the Earth’s core to power the surface volcano at Yellowstone.

“Instead, the underground images we captured suggest that Yellowstone volcanoes were produced by a gigantic ancient oceanic plate that dove under the Western United States about 30 million years ago.

“This ancient oceanic plate broke into pieces, resulting in perturbations of unusual rocks in the mantle which led to volcanic eruptions in the past 16 million years.”

The expert added the Yellowstone eruptions are understood to have been extremely violent and explosive.

Professor Zhou and her associates created X-ray-like images of the Earth’s interior with the aid of the USArray network of potable seismographs spread across the continental US.

The researcher discovered an anomalous structure about 250 to 400 miles beneath the line of Yellowstone volcanoes.

Professor Zhou said: “This evidence was in direct contradiction to the plume model.”

Roughly 16 million years ago a gigantic oceanic plate in the Pacific, dubbed the Farallon plate, wedged itself beneath the modern-day Western US.

The Farallon plate crumbled into numerous pieces as a result and a section of the subducted plate tore off and sunk into deep earth.

The sinking section of the plate caused hot material to slowly creep upwards to form what today is known as the Yellowstone supervolcano chain.

Professor Zhou said: “The process started at the Oregon-Idaho border about 16 million years ago and propagated northwestward, forming a line of volcanoes that are progressively younger as they stretched northwest to present-day Wyoming.”

The previously accepted plume model of Yellowstone volcanism was used to explain the supervolcano’s hotspots stretching from Oregon, through Idaho, Wyoming and the Midwest.

But Professor Zhou said the moving North American plate would have displaced the older volcanoes over the fixed-position plume towards the Oregon-Idaho border.

She said: “It has always been a problem there, and scientists have tried to come up with different ways to explain the cause of Yellowstone volcanoes, but it has been unsuccessful.”

The last known Yellowstone volcano eruption is estimated to have occurred some 630,000 years ago but there are no models to predict when Yellowstone might blow again.

But applying the X-ray-like technology to the supervolcano caldera can help scientist further study the oceanic plate that appears to have driven Yellowstone volcanism millions of years ago.

Professor Zhou said: “This is the first time the new imaging theory has been applied to this type of seismic data, which allowed us to see anomalous structures in the Earth’s mantle that would otherwise not be resolvable using traditional methods.

“The next step will be to increase the resolution of the X-ray-like images of the underground rock.

“More detailed images of the unusual rocks in the deep earth will allow us to use computer simulation to recreate the fragmentation of the gigantic oceanic plate and test different scenarios of how rock melting and magma feeding system work for the Yellowstone volcanoes.”

The Real Reason For Using Flight Mode Is Not What You Think : ScienceAlert
The Frogs Vanished, Then People Got Sick. This Was No Harmless Coincidence. : ScienceAlert
JWST’s First Glimpse of Mars Reveals The Red Planet in a New Light : ScienceAlert
Wolves Really Can Become Attached to Humans Like Dogs Can, Adorable Study Finds : ScienceAlert
A New FRB Signal Has Buzzed Nearly 2,000 Times in Just Two Months, Raising a Mystery : ScienceAlert