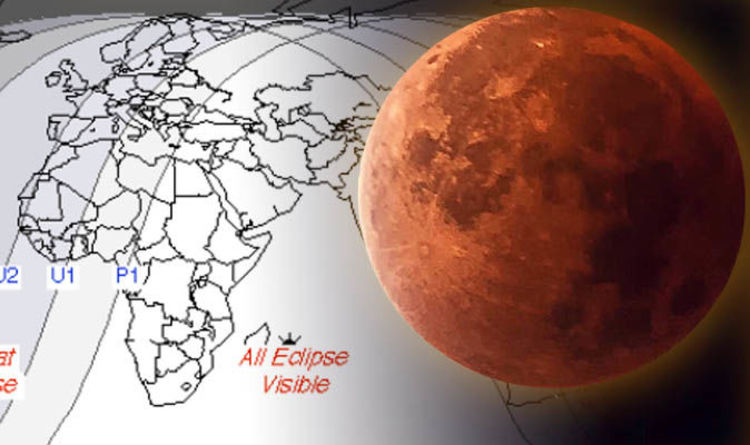 
The second Blood Moon eclipse of the year will appear on the nightside of Earth tomorrow (Friday, July 27) in the late afternoon to evening hours.

Depending on where you live, you could be treated to the longest total lunar eclipse of the 21st century.

NASA’s Moon experts at the Goddard Space Center estimate the Blood Moon’s totality will last around one hour and 43 minutes.

During this window of totality, refracted sunlight in the Earth’s dusty atmosphere will paint the full Moon a deep red to orange hue.

The eclipse is composed of three distinct phases – the penumbral eclipse, the partial eclipse, and total eclipse.

Countries from Central Asia through to Eastern Africa will see all three phases one after another.

Click here to read more on when the Blood Moon will be visible in the UAE and Malaysia.

Countries to the left and right of this optimal zone are charted on the above NASA Goddard eclipse map.

In the West, the UK, France, Spain, Ghana and Algeria will not see the eclipsed Moon until moonrise.

In the East, the red Moon might not make an appearance until moonset on the morning of Saturday, July 28.

This includes swathes of Southeast Asia, the Pacific and Australia.

Click here to read more on when the Blood Moon will be visible in India and Australia.

Some unlucky nations in South America run the risk of missing the eclipse because the last stages of the Blood Moon will not be visible until the final moments of the eclipse.

Observers in Northern America and Central America are well out of luck because they will still be in the dayside of Earth when the eclipse unfolds.

Moon-gazers in the USA, Canada and Mexico will have to rely instead on lunar eclipse livestreams broadcast on the internet.

You can read more about the Blood Moon livestream options available to you here.

The next solar eclipse will appear on the night of January 21, 2019, and will be seen from the USA and UK.

Ancient Burial of a Young Girl Shows How We Carried Our Babies 10,000 Years Ago : ScienceAlert
It Turns Out There Is Such a Thing as Good Gossip, According to New Research : ScienceAlert
These Are The Most Distant Star Clusters Ever Seen, And We Nearly Missed Them : ScienceAlert
Hubble And Webb Pics Reveal DART Impact Was Even Bigger Than Expected : ScienceAlert
Astronomers Think They Know The Reason For Uranus’s Kooky Off-Kilter Axis : ScienceAlert