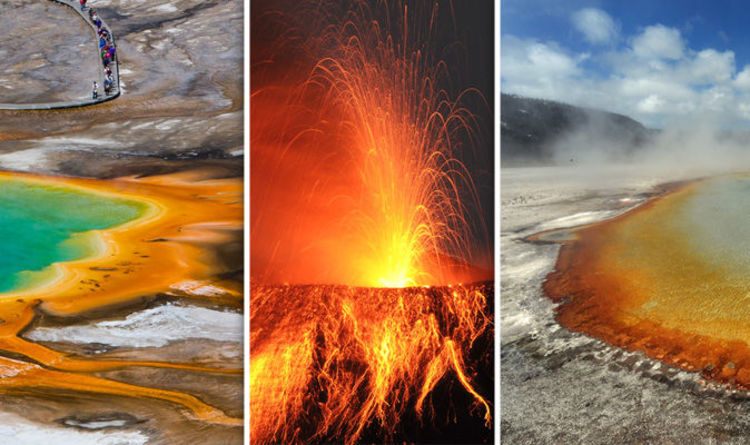 
They said the Yellowstone Supervolcano, which lies beneath Yellowstone National Park in the US northwest, hides a terrifying secret below the surface: a 217-mile wide hotspot which reaches temperatures of 850 degrees celsius.

The claim was made in a new report which contradicts previous theories the hotspot below the surface was far shallower and cooler.

The pair said the dispute regarding the depth of the supervolcanic hotspot continued to divide scientists.

They wrote: “The Yellowstone hotspot, located in North America, is an intraplate source of magmatism the cause of which is hotly debated.

“Some argue that a deep mantle plume sourced at the base of the mantle supplies the heat beneath Yellowstone, whereas others claim shallower subduction or lithospheric-related processes can explain the anomalous magmatism.“

Here we present a shear wave tomography model for the deep mantle beneath the western United States that was made using the travel times of core waves recorded by the dense USArray seismic network.”

They said their research, based on tomographic scans of the lower mantle, revealed an anomaly.

This anomaly, they said, was “tilted”, incredibly hot and spread across more than 200 miles of the Yellowstone landscape.

Their report said: “The model reveals a single narrow, cylindrically shaped slow anomaly, approximately 350 km in diameter that we interpret as a whole-mantle plume.

“The anomaly is tilted to the northeast and extends from the core–mantle boundary to the surficial position of the Yellowstone hotspot.

“The structure gradually decreases in strength from the deepest mantle towards the surface and if it is purely a thermal anomaly this implies an initial excess temperature of 650 to 850 °C.

“Our results strongly support a deep origin for the Yellowstone hotspot, and also provide evidence for the existence of thin thermal mantle plumes that are currently beyond the resolution of global tomography models.”

If the supervolcano were to erupt, the miles of lava and toxic ash clouds could kill millions of people by blotting out the sun and creating an artificial winter.

Experts predict almost 400,000 people would be killed instantly by the eruption, and millions more would die as the ash cloud covers the sky.

Fears of an imminent eruption were sparked last year when a swarm of 1,400 mini quakes shook Yellowstone National Park.

Bar Graphs Induce a Hidden Bias in Interpretation, Experiment Shows : ScienceAlert
No One Likes Commutes, But They May Actually Be Good For Mental Health, Study Finds : ScienceAlert
Wildfire Destruction in The Western US Has Doubled in Just 10 Years : ScienceAlert
A Splash of Milk in Coffee May Have Health Benefits We Didn’t Know About : ScienceAlert
We Used to Hate Commuting. Now We Realize We’ve Lost Something. : ScienceAlert