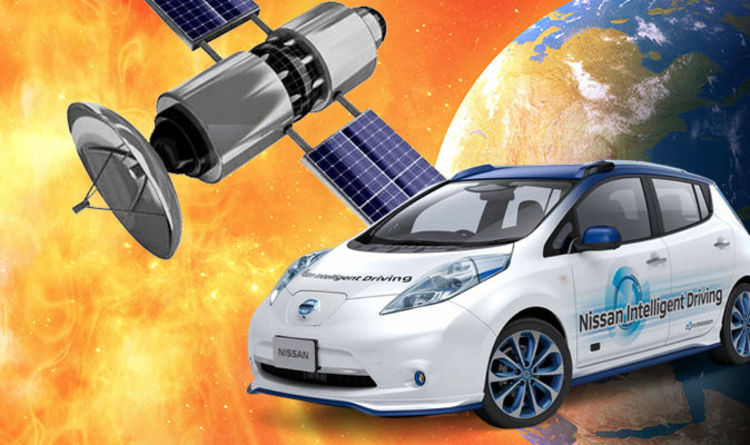 
Scott McIntosh, director of the high-altitude observatory at the National Centre for Atmospheric Research in Boulder, Colorado, warned that self-driving systems should not be too reliant on GPS systems which are vulnerable to the effects of space weather.

Solar storms are usually the result of coronal mass ejections from the sun, whereby billions of tons of plasma explodes out in a random direction.

If this happens to be pointed towards Earth, technology could be wiped out.

Storms are rated on a five-step scale, the biggest of which can cripple international power grids, knock out satellites and disrupt radio communication on the sunlit side of the Earth.

In addition, this could mean driverless cars being forced to pull over and wait for connectivity to return, however long that took.

Mr Mackintosh said: “There is a lot riding on this, from an actuarial point of view.

“All it is going to take is a couple of accidents” and the industry will suffer.

The SWPC acts as an early warning system to warn utilities, airlines and other industries which rely heavily on airborne data.

Generally, the Earth gets notice 30 to 60 minutes before charged particles start wreaking havoc.

In September of last year, this system paid off.

Airplane flights bound for the poles were rerouted when the satellite recorded two CMEs, one of which was rated a three on the severity scale.

Mr Macintosh said: “That is the kind of game we are playing with civilisation.”

Professor Mike Hapgood last week warned that a future solar storm at the higher end of the scale could cause significant problems in a world which is increasingly reliant on technology.

The most severe solar storm on record, in 1859, knocked out telegraph communications throughout the world, with some operators getting electric shocks.

He said: “We need to be prepared for something like this happening again because it could have a major impact.

“I think one sector which would definitely find it difficult is the emergency services, which have come to rely of GPS.

“Losing that could slow them down a lot.”

Newly Discovered Fossil Reveals Hundreds of Teeth ‘Never Seen Before in a Pterosaur’ : ScienceAlert
Scientists Create Shapeshifting Humanoid Robot That Can Liquefy And Reform : ScienceAlert
There’s a ‘Lost City’ Deep in The Ocean, And It’s Unlike Anything We’ve Ever Seen : ScienceAlert
Major Blow as Experimental HIV Vaccine Fails in Late Clinical Trial : ScienceAlert
Mysterious Medieval City in Africa Had a Genius System to Survive Drought : ScienceAlert