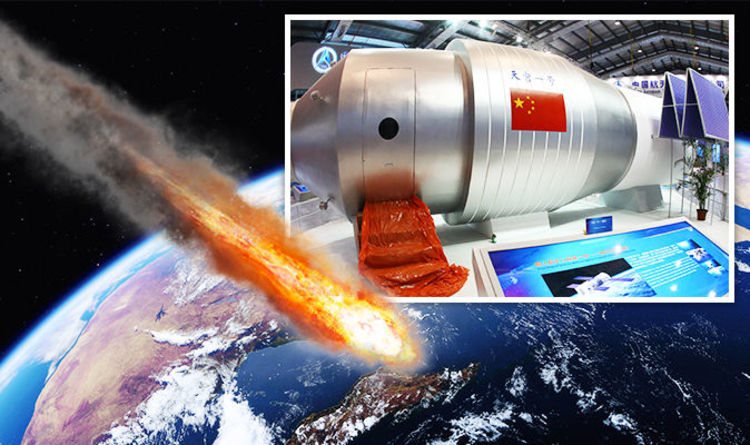 
Space experts say the huge eight-and-a-half tonne mass, which is heavier than an African elephant, could hit a populated area in a worst-case scenario as it starts its fiery ascent into the Earth’s atmosphere.

Tiangong-1, also known as Heavenly Palace, vanished from its Chinese creators’ monitors in March 2016 but has since been relocated.

It is now being “closely monitored” by the Aerospace Corporation’s Centre for Orbital and Debris Reentry Studies (CORDS) which tracks space debris for collision avoidance.

When will Tiangong-1 satellite fall to earth? Where will it crash?

The European Space Agency (ESA) has said crash date estimates are ‘highly variable’ at present but scientists are giving revised forecasts on the free-falling space station every couple of days.

The crash window has been narrowed down to March 30 and April 3, with the most likely date being April 1.

Experts say the satellite has the highest chance of smashing into a narrow strip around latitudes of 43 degrees north and south.

Mass-populated cities including New York, Michigan, Barcelona, Beijing, Rome and Toronto are all at risk if this happens.

While the space station measures 34 feet long and 11 feet in diameter, much of the spacecraft will burn up upon re-entry leaving the rest to fall as debris.

Aerospace Corporation has played down fears, saying the fragments are most likely to fall into the ocean with the chance of a person being hit less than one in 1,000,000,000,000.

It said: “When considering the worst-case location, the probability that a specific person will be struck by Tiangong-1 debris is about one million times smaller than the odds of winning the Powerball jackpot.

“In the history of spaceflight, no known person has ever been harmed by re-entering space debris.

Are there any other dangers?

If exposed to humans, the rocket fuel can cause nausea and seizures, as well as cancer in the long-term.

Bigfoot Has a Very Simple Explanation, Scientist Says : ScienceAlert
No One Likes Commutes, But They May Actually Be Good For Mental Health, Study Finds : ScienceAlert
How a Dead Girl in Paris Wound Up With The Most-Kissed Lips in All of History : ScienceAlert
We Used to Hate Commuting. Now We Realize We’ve Lost Something. : ScienceAlert
Super-Rare Star System Is a Giant Cosmic Accident Waiting to Happen : ScienceAlert