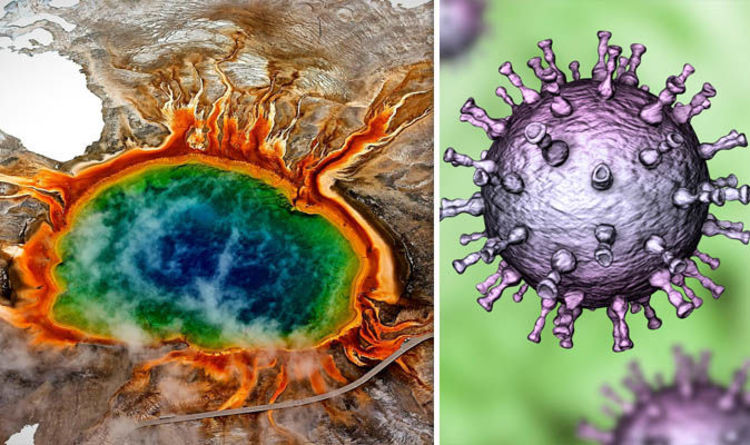 
A scientist who has dedicated seven years of her life to studying viruses thriving in the Yellowstone Hayden Valley claims to have come across a potentially game changing discovery.

Ms Hochstein came across her startling findings in an 80ºC (176ºF) degree pool, where she unearthed a mysterious lemon-shaped virus strand.

According to study co-author Martin Lawrence, of the MSU Department of Chemistry and Biochemistry, there are three typical shapes of virus known to man.

He said: “There are really only three common shapes for viruses – spherical, cylindrical and lemon-shaped.

“We have understood for many years the principles for the construction of cylindrical and spherical viruses, but this is the first time we have really understood how the third class of viruses is put together.”

“We now understand how this third kind of virus shell is assembled and the dynamic process it uses to carry and then eventually eject the DNA that it is carrying.

“This understanding could potentially be adapted for technological uses.”

The monumental discovery could now explain how viruses change form and pave the way for innovative virus-based cancer treatments.

Professor Lawrence said these viruses could be “loaded” with medicinal cargos and unleashed inside the human body to target specific areas, such as cancer tumours.

This could in effect make targeted drug treatments much more effective, opening up new avenues for therapy and reduce drug side effects.

Co-author Mark Young, professor of Plant Sciences and Plant Pathology at MSU, further underlined the virus’ resilience to the deadly conditions of Yellowstone could lead to breakthrough biotech research.

He said: “The detailed understanding of this virus isolated from a boiling acid hot spring in Yellowstone provides a potentially new virus-based nano-container that can operate at high temperature and acidic conditions which is of interest to biotech companies.

“This is because it extends the conditions under which virus-based nano-cages can operate.

“Already, these types of nano-cages have been shown to be stable in the animal GI track, opening the possibility for their development as smart drug delivery systems.”

Viruses have been used extensively in medicine in recent years, thanks to the rise of virotherapy.

Cancer research studies have increasingly looked into the applications of oncolytic ECHO-7 viruses in combating cancer and cancer remission.

According to the Journal of Cancer, several oncolytic based therapies have already been approved and registered for cancer therapy in the past decade.

Latvia was the first to approve such medicine in 2004 with Rigvir, followed by Oncorine in 2005 in China and Imlygic in 2015 in the US and Europe.

Viral gene therapy has also been extensively studied in relation to Parkinson’s disease, to deliver reserves of Dopamine straight to the brain in order to prevent the disease.

An Expert Explains Why The Radioactive Water Stored at Fukushima Should Be Released : ScienceAlert
One Simple Idea Makes It Much Easier to Manage Your Weight Over Time : ScienceAlert
There’s a ‘Lost City’ Deep in The Ocean, And It’s Unlike Anything We’ve Ever Seen : ScienceAlert
JWST Has Found Life’s Elemental Building Blocks in The Depths of Darkest Space : ScienceAlert
Our Body Temps Have Been Dropping For 160 Years. Gut Microbes May Be Playing a Role : ScienceAlert