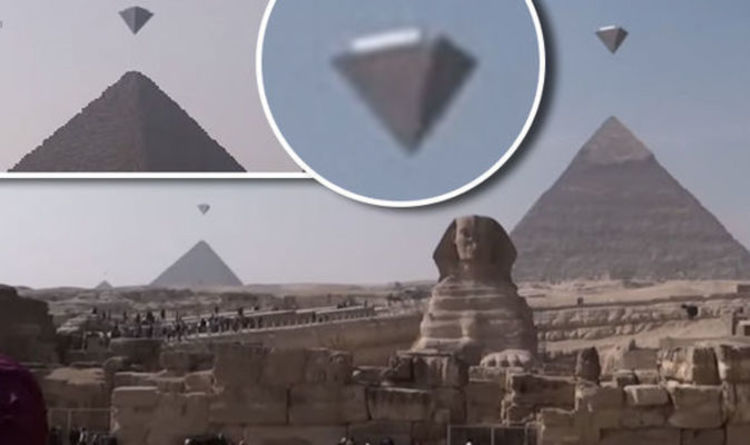 
The reports point out that Egyptian legends date their origins back to the Zep Tepi, which translates as the “first time”, a “golden age” when legend says gods descended from the sky in eggs or boats.

The staggering claim builds on the ancient aliens theory which says that monuments like the great pyramids and Stonehenge, in Wiltshire could not have been created using the human technology available at the time.

The theories suggest that advanced lifeforms from space passed on their knowledge or created the monuments before civilisations emerged, Dailystar.co.uk reports.

One conspiracy website outerworlds.com dedicates a whole section to the argument that “aliens built the pyramids.”

The theory says because two imiginary diagonal lines extend from the pyramids on either side of the Nile River delta, the early Egyptians could not have known this when building them, to be so accurate with their positioning.

With their precise measurements and alignments with celestial bodies and magnetic north, it has long been argued that our ancestors around 4,600 years ago would have been unable to physically build the ancient Pyramids of Giza.

It takes the giant leap from the mystery to say it must have been aliens.

These other worldly visitors were then revered as gods by our ancestors, who then worshipped them from these ancient monuments.

The theory says: “The ones which were supposedly built to house the remains of dead pharaohs?

“The ones you thought were built by the Egyptians? Well, you are wrong.

“They were built by ALIENS!

“Let’s take a look at some undeniable evidence.”

It states: “Here is what really happened: A couple of aliens, flying high enough over the Earth to be able to see where the Nile Delta’s origin is, easily saw what orientation the pyramid would need to be in order to have its diagonals lie on those two lines.”

It says: “How could the Egyptians possibly have built their pyramid facing the exact magnetic North Pole without even having a compass?

“Those aliens, abundant in their knowledge and drowning in technology, came along and using their compasses, they landed on Earth and found the actual magnetic North and South Poles. Then they built the pyramids.”

The website cites several further examples that it claims are proof that the pyramids were built so mathematically perfectly to align with celestial objects, it simply would not have been possible for our early ancestors to achieve this.

It uses a photograph of the Great Pyramid of Giza, and its neighbour, as seen from the Sphinx, on the evening of the summer solstice.

The Sun is seen setting in the exact centre of the two pyramids.

At the time, the Egyptians did not know the exact length of the year, or when the summer solstice was, it says.

It claims aliens would, however, have been able to calculate the longest day of the year.

The Sun also rises and traces the head of the sphinx on the winter solstice, the website points out.

The website states: “The aliens, with their plethora of wisdom, came down in the year 10,500 BC and built the Pyramids and the Sphinx.

“They built it with a head of a lion to match the Belt of Orion, as well as the constellation of Leo.

“Thousands of years later, Ramses, the egomaniacal dictator-pharaoh of Egypt, decided that he didn’t like having the head of a lion on top of the statue in his land.

“So, he had a head in his own likeness constructed instead.”

The website suggests that if humans could not have done it, then superior aliens must have been involved.

But, on the flip side ancientaliensdebunked.com is as equally passionate about the evidence that humans could have built the pyramids when history tells us they were constructed.

In an article about the pyramids, the website says the so-called unfinished obelisk, is 1,000 tones and made of granite, but was abandoned midway through because a crack developed.

It said: “This stone, because it is unfinished, gives us direct insight into how they cut and shaped granite, as well as other stones.

“After the stones had been roughly shaped using pounding stones, they would begin to polish them with grinders.

“There have been many types of stone grinders, or polishers, found in ancient Egypt.

“About 85 per cent of the stone used in the construction of the pyramids was relatively soft sandstone which was quarried right on site.”

The site says there is evidence that wooden sleds with ropes made from papyrus were used to move stones.

It added: “I at least hope that by now most of us can see that these construction techniques are well within the capability of mankind to conceive and achieve without the intervention of aliens.”

This Species of Carnivorous Plant Evolved Into a Toilet And Is Now Winning at Life : ScienceAlert
Newly Discovered Fossil Reveals Hundreds of Teeth ‘Never Seen Before in a Pterosaur’ : ScienceAlert
Dozens in 7,000 Year Old Mass Grave Were Carefully Decapitated After Death : ScienceAlert
This Physicist Says Electrons Spin in Quantum Physics After All. Here’s Why : ScienceAlert
‘Funky Worm’ Fossil Helps Explain The Mysterious Origins of Amphibians : ScienceAlert