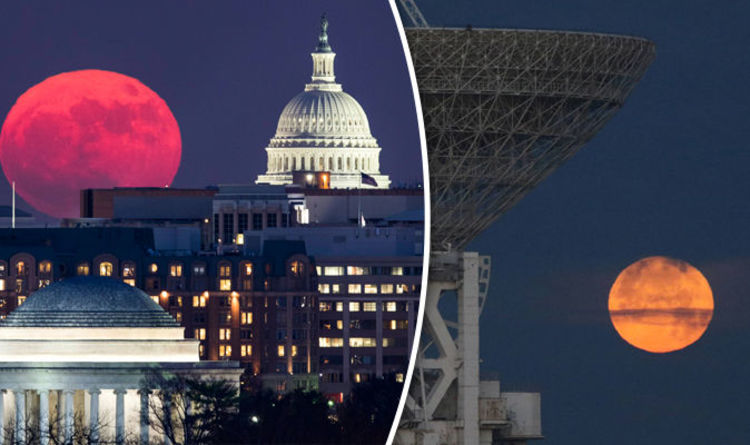 
The New Year supermoon was the second of a trilogy of awe-inspiring supermoons between December and the end of January.

NASA has said that the next “extra special” supermoon will reach its peak on the last night of January – Wednesday January 31 2018.

The supermoon, which is also a rare Blue Moon, will take on an red eerie glow because it coincides with a total lunar eclipse across America.

During a total lunar eclipses, the moon is sometimes known as a Blood Moon because of the way the atmosphere bends the light.

Blue Moon is the name given to the second fall moon of January, which only happens every two and a half years on average.

The totality of the lunar eclipse will be seen from western North America all the way across the Pacific to Eastern Asia.

The eclipsed moon will lose its brightness and take on an eerie, fainter-than-normal glow and could appear a menacing red in the night sky.

Supermoons are usually 14 per cent bigger and 30 per cent brighter than when the moon is at its furthest from Earth.

Engineers Gave a Car a Pair of Eyes to Make Future Roads Safer For Pedestrians : ScienceAlert
Fossil-Filled Australian Caves May Be 500,000 Years Older Than We Thought, Study Finds : ScienceAlert
Watch a Tiny Robot Blob Transform Into Even Tinier Bits to Squeeze Through Cracks : ScienceAlert
Termites Love Global Warming So Much That They May Make It Worse, Says Study : ScienceAlert
These Are The Most Distant Star Clusters Ever Seen, And We Nearly Missed Them : ScienceAlert