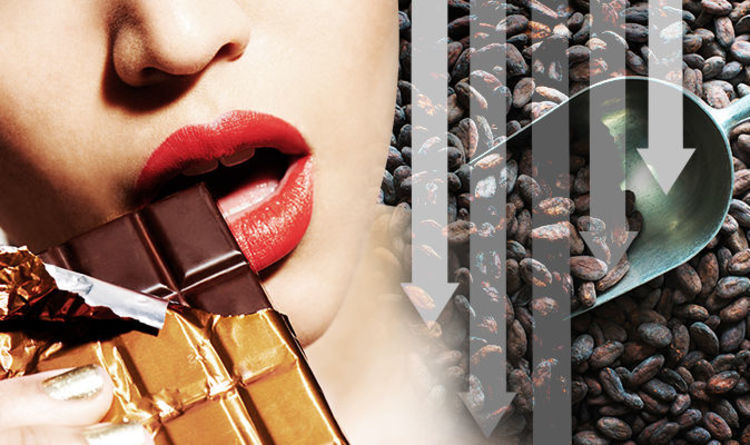 
A chocolate shortage is on the horizon as the cacao tree, on which cocoa beans are grown, can only survive in humid rainforest conditions.

The delicate plant is under threat as rising temperatures is sucking moisture from the soils where the tress grow.

This has led experts to believe that by 2050 the plant will be impossible to grow – particularly in the Ivory Coast and Ghana where more than 50 per cent of the world’s cocoa is produced.

As a result, farmers will have little choice but to move their cacao trees to higher grounds, but competition for places will be fierce as there is limited spaces.

The demand for chocolate already outstrips supply as the continent of Africa has recently upped its intake to be more in line with the high demand for the sweet treats in Europe and North America.

The average westerner eats 286 bars of chocolate every year.

For this amount, farmers need to plant 10 cacao trees, making the demand unsustainable, especially as Africa and Asia’s demand for chocolate in increasing.

Part of the issue is the majority of cocoa is produced by farmers who are unable to afford fertilisers and insecticides, according to Doug Hawkins, of Hardman Agribusiness – a capital markets firm which focusses on the agricultural business sector.

Mr Hawkins said: “Unlike other tree crops that have benefited from the development of modern, high yielding cultivars and crop management techniques to realise their genetic potential, more than 90 per cent of the global cocoa crop is produced by smallholders on subsistence farms with unimproved planting material.

“All the indicators are that we could be looking at a chocolate deficit of 100,000 tons a year in the next few years.”

Watch a Tiny Robot Blob Transform Into Even Tinier Bits to Squeeze Through Cracks : ScienceAlert
Behold, The Epic Last Images Taken by NASA’s Asteroid Redirection Test Spacecraft : ScienceAlert
We Just Got Our Closest View of Europa in 20 Years, And We Can’t Stop Staring : ScienceAlert
Wolves Really Can Become Attached to Humans Like Dogs Can, Adorable Study Finds : ScienceAlert
Deep Brain Simulation Could Alleviate OCD When Other Treatments Have Failed : ScienceAlert