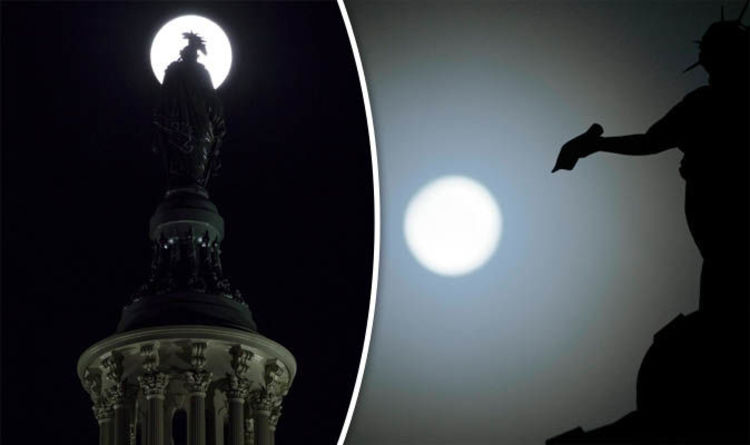 
Last night’s full moon was the first of two supermoons due to brighten night skies this month – and it did not disappoint.

Clear skies over most of the UK meant stargazing conditions were perfect for the Wolf Moon’s peak at 2.24am.

In Washington DC, United States, a glowing red moon was pictured rising behind the US Capitol and Jefferson Memorial.

Elsewhere, a yellow-tinged image was snapped next to the Shard building while shining globes were seen in South Korea and Myanmar (Burma).

Excited astronomers said the celestial event provided great photo opportunities of the first full moon of the year, which is named after howling wolves.

Tom Kerss, astronomer at the Royal Observatory Greenwich, tweeted: “It was well worth waiting for the clouds to clear over Greenwich tonight!”

A supermoon is a new or full moon that happens at the same time as perigee – the point at which the moon’s orbit is closest to earth.

According to NASA, these moons appears about 14 per cent bigger and 30 per brighter than full moons that coincide with apogee (the side that is furthest from the Earth) when there is a “micromoon”.

Although this was the first of three successive supermoons – the last being on January 31, 2018 – this one was the brightest.

Writing on astronomy website EarthSky, Bruce McClure said: “This full moon comes only 4.5 hours after the moon reaches lunar perigee – the moon’s closest point to Earth in its monthly orbit. Thus this full moon presents the closest – and thereby the largest and brightest – supermoon of 2018.

“Of the 13 full moons and 14 lunar perigees occurring in 2018, this is the closest alignment of full moon and lunar perigee for the year.”

The name was coined by astrologer Richard Nolle in 1979.

Skywatchers and space enthusiasts will now have to wait until the end of the month to see the next one.

But if you’re feeling impatient, check out the 2018 Quadrantid Meteor Shower, expected to peak after nightfall on January 3 until the early hours of January 4.

Amazing New Fossils Provide Earliest Known Traces of The Evolution of Our Jaws And Limbs : ScienceAlert
Superconductivity Model With 100,000 Equations Now Contains Just 4 Thanks to AI : ScienceAlert
Ancient Burial of a Young Girl Shows How We Carried Our Babies 10,000 Years Ago : ScienceAlert
Bitcoin’s Climate Impact Is Bigger Than Beef Farming – And It’s Only Getting Worse : ScienceAlert
The Tonga Eruption’s 50 Million Tons of Water Vapor May Warm Earth For Months to Come : ScienceAlert