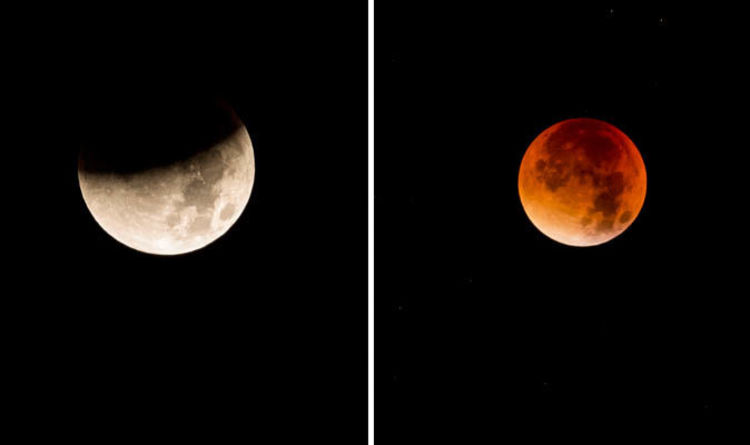 
The super blue blood moon will be visible on Wednesday January 31 as a blue moon, a supermoon and a total lunar eclipse coincide to create the spectacle which experts have said has not been viewed for 150 years.

According to NASA, the “super blue blood moon” was last seen when the three elements combined in 1866.

This super moon is the last in the ‘Supermoon Trilogy’ which began in early December, the second supermoon – also known as a Wolf Moon – was visible on January 1.

The January 31 supermoon coincides with a total lunar eclipse, which sometimes makes the supermoon take on a red glow and therefore it becomes a blood moon.

A blue moon happens when there are two full moons in the same calendar month and a supermoon happen when the moon’s perigee – its closes approach to Earth in a single orbit – coincides with a full moon.

What time is the Super Blue Blood Moon in YOUR area?

Those in the UK will not be able to see the lunar eclipse because it will only be visible on Earth’s night side.

However for Brits who are unable to watch the phenomenon in person, the event will be live streamed by NASA beginning at 10.30am GMT (5.30am ET) on January 31.

Where will the Super Blue Blood Moon be visible?

Skywatchers in Hawaii will be able to view the entire spectacle from beginning to end, as will Alaskans and viewers in eastern Asia and Australia.

People in eastern Europe and western Asia will see something like a mirror image of the eclipse that observers in the Americas will see, as the eclipse will start before the moon rises, instead of occurring near moonset, Space.com has said.

Those living in North America, Alaska or Hawaii, the eclipse will be visible before sunrise on January 31 and residents in the Middle East, Asia, eastern Russia, Australia and New Zeland the super blue blood moon can be seen during moonrise in the morning on January 31.

“Weather permitting, the West Coast, Alaska and Hawaii will have a spectacular view of totality from start to finish,” Gordon Johnston, at NASA said. “Unfortunately, eclipse viewing will be more challenging in the Eastern time zone. The eclipse begins at 5:51 AM ET, as the Moon is about to set in the western sky, and the sky is getting lighter in the east.”

In North America, there will be another lunar eclipse throughout all of the US which will also be a supermoon, although it will not be a blue moon.

We Just Got Our Closest View of Europa in 20 Years, And We Can’t Stop Staring : ScienceAlert
Shimmering ‘Lakes’ Under The South Pole of Mars Might Be Something Else Entirely : ScienceAlert
Fossil-Filled Australian Caves May Be 500,000 Years Older Than We Thought, Study Finds : ScienceAlert
Experts Estimate The Scale of The Nord Stream Pipelines Methane Leak : ScienceAlert
Still Short of Breath? Here Are 3 Ways COVID-19 Can Damage Lungs Long Term : ScienceAlert