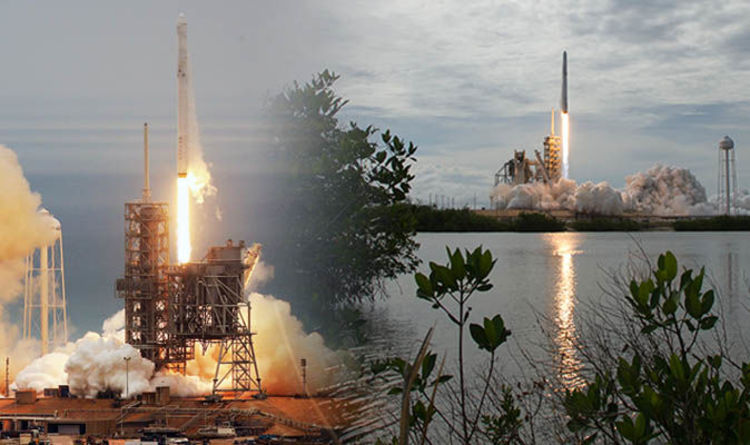 
What time is the SpaceX launch?

The launch takes place at the Kennedy Space Center in Cape Canaveral, Florida, and will mark Falcon 9’s 48th mission since its maiden flight back in 2010.

Falcon 9’s payload will be a GovSat-1 satellite, which it is carrying into orbit on behalf of the government of Luxembourg and the world’s leading satellite operator SES.

Patrick Biewer, CEO of GovSat, said: “We are committed to our mission of providing secure satellite communication services for governments and institutions.

“GovSat-1, with its highly flexible payload featuring advanced encryption and anti-jamming capabilities, will further secure the connectivity for our users’ applications.

“We are incredibly excited about the upcoming launch of this satellite.”

Once in place, the GovSat-1 will operate from 21.5 degrees east and will be positioned to “address communications and provide highly reliable and flexible interconnectivity within Europe, Middle East and Africa.”

The satellite will be capable of assisting in maritime operations over the Atlantic and Indian oceans.

Describing the space tech, GovSat said: “GovSat-1 is designed for dual use, supporting both defence and civil security applications, including mobile and fixed communications.

“It also provides enhanced resilience capabilities – with anti-jamming features, encrypted Telemetry and Control, and use of military frequencies.

“It is the first time that such an extensive security-enhanced satellite communications capability is being provided out of a public-private venture, where world-leading satellite operator SES combines its expertise with the ambitions and values of the Luxembourg Government.”

The launch comes after SpaceX was forced to defend its record earlier this month after questions were raised about the potential failure of the highly-secretive Zuma mission.

“We’re picking up the launches by the end of the month, as we planned.”

SES have voiced their confidence in SpaceX to deliver the satellite safely.

“We are confident on SpaceX readiness and set for Govsat-1 launch late Jan!”

Hubble And Webb Pics Reveal DART Impact Was Even Bigger Than Expected : ScienceAlert
Fossil-Filled Australian Caves May Be 500,000 Years Older Than We Thought, Study Finds : ScienceAlert
Superconductivity Model With 100,000 Equations Now Contains Just 4 Thanks to AI : ScienceAlert
The Tonga Eruption’s 50 Million Tons of Water Vapor May Warm Earth For Months to Come : ScienceAlert
These Are The Most Distant Star Clusters Ever Seen, And We Nearly Missed Them : ScienceAlert