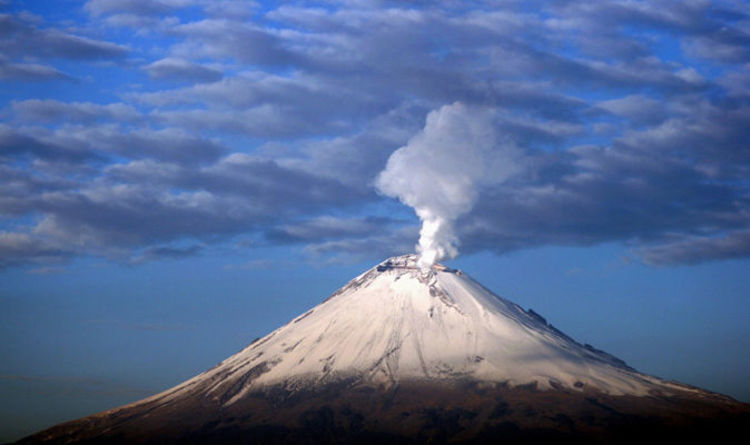 Officials have issued a Yellow Warning for both of the volcanoes which means that it is showing signs of unrest and will continue to be closely monitored.

Authorities in Mexico said on a government website regarding El Popo: “In the last 24 hours, through the monitoring systems at Popocatépetl volcano, were registered 30 exhalations with emissions of steam and gas.

“CENAPRED emphasises that people SHOULD NOT go near the volcano, especially near the crater, due to the hazard caused by ballistic fragments.”

El Popo is one of the most dangerous volcanoes in North America and is just 70 kilometres away from Mexico City.

An eruption would threaten the 9 MILLION inhabitants.

Meanwhile, the Alaska Volcano Observatory issued a similar statement about the Great Sitkin volcano: “Earthquake activity at Great Sitkin Volcano has been elevated over the past five days, and earlier today at 11:39 AKDT (19:39 UTC), a signal that may represent a short-lived steam explosion was detected by seismic data.”

Unlike El Popo, the Great Sitkin is located in a remote area away from civilisation.

Still, an eruption could cause travel chaos as huge plumes of smoke and ash could block flight paths.

The two volcanoes both sit on the potentially catastrophic ‘Ring of Fire’ – a series of fragile fault lines that stretches from New Zealand, all around the east coast of Asia, over to Canada and the USA then all the way down to the southern tip of South America.

To make matters worse, Yellowstone volcano’s largest geyser has erupted for the eighth time in three months leaving scientists to worry and speculate over the cause of the explosion.

Steamboat Geyser roared back into life earlier last April with the first triple eruption in 15 years, sparking interest from the scientific community.

Now, scientists are reporting that it has blown at least eight times in the last three months, prompting fears that there is dangerous activity beneath the surface of the US’s most catastrophic volcano.

The Brains of Teenagers Look Disturbingly Different After Lockdown : ScienceAlert
Some People May Make Extreme Snap Judgements About You Thanks to Face-ism : ScienceAlert
A ‘Wormhole’ Built on a Quantum Computer Teleported Information as Predicted : ScienceAlert
Oldest Known Dog Bone Hints Our Best Friends Were With Us Earlier Than Thought : ScienceAlert
Millions of ‘Silent Synapses’ Could Be The Key to Lifelong Learning : ScienceAlert