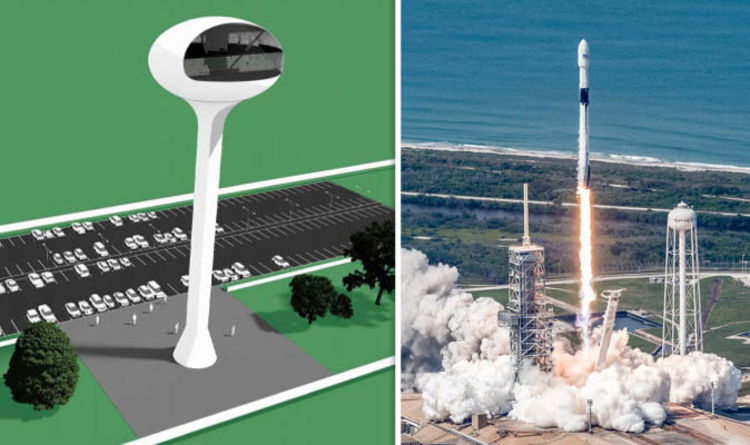 
The US rocket manufacturer will expand its launch operations with the construction of a brand new launch control tower, rocket hangar and a visitor-friendly rocket garden area.

The proposed upgrade plans were tucked away in a KSC draft environmental review and have now seen the light of day.

The KSC document outline proposed plans for the development of “a launch and landing control centre, a booster and spacecraft fairing processing and storage facility, a rocket garden, and utilities yard”.

According to the filed papers, SpaceX aims to extend its operations to meet the growing demand for both national and international commercial space flight.

The SpaceX control tower, straight out of the sci-fi show The Jetsons, is a 300-feet-tall white structure and Falcon rocket centre of operations.

“The launch control centre is envisioned to be world-class, architecturally distinctive, and equipped for satellite, cargo, and crew missions.”

SpaceX also looks to appease many of its dedicated fans by constructing a commemorative garden to house a display of its iconic rocket designs.

Hidden in the KSC documents are additional plans to construct a brand new security office, utilities yard and a storage facility for the company’s rocket modules.

The document reads: “With SpaceX plans to refurbish and reuse Falcon vehicles to support manifest rate, an additional vehicle processing and storage facility is required.

“This facility would require a footprint of 12,356m2 with a height not to exceed 31m.

SpaceX is now seeking permission to construct the new facilities on a 67-acre patch of the NASA operated rocket launch centre.

If officials at KSC deem the construction project will not have a major environmental impact on the are, SpaceX will be given the green light to go full steam ahead.

SpaceX spokesman James Gleeson said: “As SpaceX’s launch cadence and manifest for missions from Florida continues to grow, we are seeking to expand our capabilities and streamline operations to launch, land and re-fly our Falcon family of rockets.”

Currently the rocket company is committed to more than 70 space flight missions, worth £7.48billion ($10billion).

SpaceX headquarters are located in Hawthorne, California, with additional facilities, offices and launch pads in Washington, Florida Texas and Virginia.

The company’s next rocket launch from Florida’s KSC is pencilled in for a 5.41am, local time, launch window on June 29.