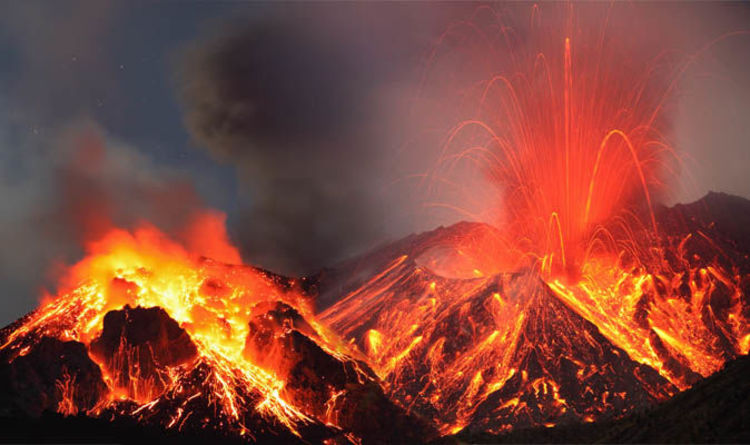 
Rising levels of carbon dioxide (CO2) in the atmosphere could be linked to strong volcanic activity according to scientists at Florida State University (FSU).

The volcanologists looked at how volcano eruptions are linked to higher CO2 emissions, depleting levels of oxygen in the oceans and inevitably causing “mass extinction”.

Assistant professor Jeremy Owens, FSU, said: “We want to understand how volcanism, which can be related to modern anthropogenic carbon dioxide release, manifests itself in ocean chemistry and extinction events.

“Could this be a precursor to what we’re seeing today with oxygen loss in our oceans? Will we experience something as catastrophic as this mass extinction event.”

For the study, the researchers looked at ancient volcano eruptions from millions of years ago to draw links with the present.

Scientists studied the composition of prehistoric rocks from North America and Europe to determine ocean deoxygenation followed in the wake of monstrous volcano eruptions.

Dr Theodore Them, FSU, said: “Over the past 50 years, we’ve seen that a significant amount of oxygen has been lost from our modern oceans.

“While the timescales are different, past volcanism and carbon dioxide increases could very well be an analog for present events.”

The study comes after the deadly eruption of Guatemala’s Fuego volcano and Hawaii’s Kilauea volcano.

Earlier in May volcanologist Maarten de Moor estimated Kilauea could be releasing upwards of 15,000 metric tonnes of CO2 into the atmosphere.

Kilauea’s estimated output is roughy equivalent to just over a day’s worth of operations at a large coal-burning power plant – and not enough to cause any major climate impact.

He said: “Volcanic output of greenhouse gases is roughly matched by ocean and terrestrial carbon uptake.

“So unless there is a dramatic upsurge in volcanic activity, it doesn’t contribute at all – the background rate of volcanic outgassing is already nearly balanced out by natural carbon uptake.

“The imbalance is so small that it has to add up over millions of years to amount to anything significant.”

But even if the most recent volcano eruptions are not enough to trigger global events, the new FSU study noted an upsurge in volcanic activity can be lethal to Earth’s inhabitants.

However Dr Them argued studying past volcanic events can help future generations predict the environmental impacts of increased volcanic activity.

The volcano expert said: “It’s extremely important to study these past events.

“It seems that no matter what event we observe in Earth’s history, when we see carbon dioxide concentrations increasing rapidly, the result tends to be very similar: a major or mass extinction event.

“This is another situation where we can unequivocally link widespread oceanic deoxygenation to a mass extinction.”

The volcano eruption study published this week in the science journal Proceedings of the National Academy of Sciences.