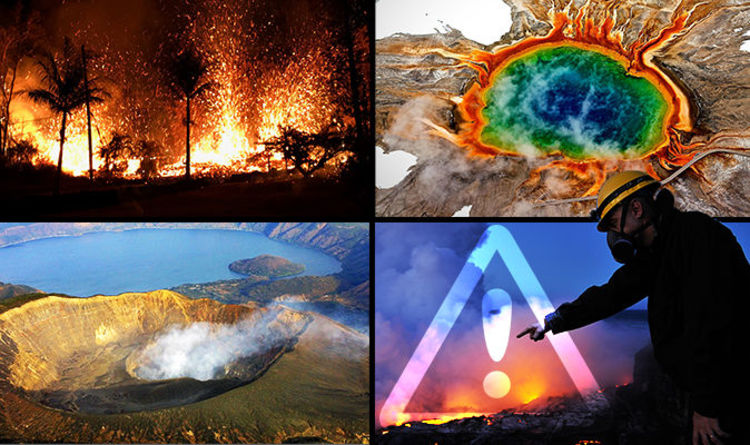 
Hawaii’s Kilauea volcano tops the list of 161 active or potentially active volcanoes assessed by the USGS.

The government agency looked at 24 hazard and exposure factors to assesses the volcanoes and update a volcanic threat assessment published by scientist John Ewert and colleagues 13 years ago.

The US has seen 120 eruptions and 52 episodes of notable volcanic unrest at 44 US volcanoes since 1980, the USGS said.

The report, entitled 2018 Update to the US Geological Survey National Volcanic Threat Assessment, said: “The 2018 update of the 2005 assessment adds or raises the threat level for 12 volcanoes and reduces or removes threat level status from 20 volcanoes.

“The threat ranking is not an indication of which volcano will erupt next.

“Rather, it is an indicator of the potential severity of impacts that could result from future eruptions at any given volcano.”

Kilauea, which erupted spectacularly earlier this year on Hawaii’s Big Island, is rated the most dangerous with an overall threat score of 263, as well as an aviation threat score, referring to the danger posed to aircraft flying across its path, of 48.

Lava from Kilauea destroyed more than 700 homes and businesses, while more than 2,000 people were evacuated, and the coastline of the island’s south-east corner was altered dramatically, with the creation of more than 500 acres of new land.

Islanders are still picking up the pieces after the widespread destruction, with Susie Osborne, headteacher of Kua O Ka La School, which was one of the buildings destroyed, admitting: “Our lives are altered forever.”

The eruptive activity at Kilauea continued for three months, but appears to have abated, and its alert level has been downgraded by Watch to Advisory.

Second on the list is Mount St Helens in Washington state, with a threat level of 235. Its aviation threat score of 59 makes it the most hazardous volcano to fly across in the entire United States.

More than 200 homes and 185 miles of road were also destroyed.

In third place is close neighbour Mount Rainier, also located in Washington, with a score of 203, and an aviation threat level of 37.

Officially Mount Rainier, which is also the highest mountain in the Cascade Range which runs up the Pacific Northwest, is dormant, with the last official eruption having occurred in 1854.

However, it is also listed by the International Association of Volcanology and Chemistry of the Earth’s Interior as a “decade volcano”, one of 16 around the world identified as being worthy of particular study in light their history of large, destructive eruptions and proximity to populated areas.

Volcanologists believe an eruption from Mount Rainier would post a grave threat to the southern sections of the Seattle metropolitan area, which is home to 3.7 million people.

Slightly further down the list, in 18th place, is Long Valley Caldera, which experts said earlier this year has a reservoir of semi-molten magma swilling around underneath measuring a staggering 240 cubic miles, much of which would be released into the atmosphere in the event of an eruption.

Such an explosion would dwarf the 1980 Mount St Helens event, which released 0.29 cubic miles.