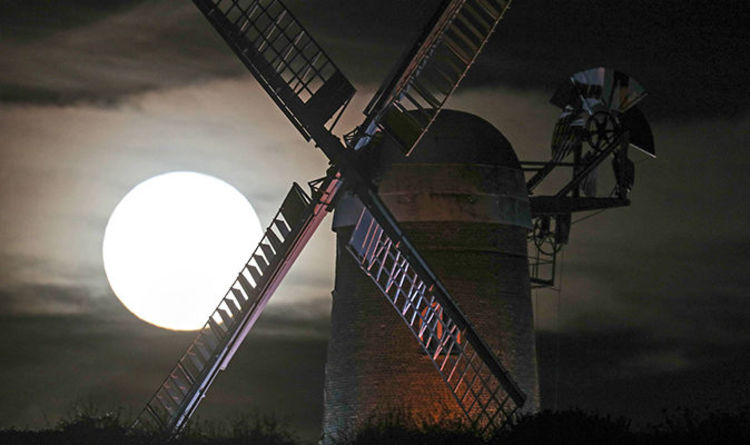 Images from around the world show the Moon glowing eerily in the October night sky.

Each full moon has a name depending on the time of year it occurs, and October’s is the Hunter’s Moon.

It is also known as the Travel Moon or Dying Grass Moon.

The origins of the Hunter’s moon hark back to the First Nations of North America.

Hunters would use the moonlight to track down deer which had fattened up over the summer.

These hunts would take place throughout October, stocking up food for the winter ahead.

The first recorded mention of a “Hunter’s Moon” was in the early 18th century.

This year’s Hunter’s Moon first appeared in the sky on Wednesday, October 24, at 5.45pm BST, just below the horizon.

As the Moon rises shortly after sunset, it can appear red or orange in hue.

Despite usually appearing in October, once every four years the Hunter’s Moon rises in November.

The next full Moon is known as the Beaver Moon and will rise on November 23.

The Beaver Moon is so-called after the nocturnal beavers who build their dams by moonlight.

In November beavers build their winter dams, using the light of the full Moon to do so.

Other names for the November Full Moon are Frost Moon, Trading Moon, and Snow Moon.

Traditionally, the last Full Moon before the winter solstice has also been named Mourning Moon.

However according to timeanddate.com the astronomical seasons do not match up with the lunar months.

Therefore, the month of the Mourning Moon varies.

Some years, the Mourning Moon is in November, while other years, it is in December.