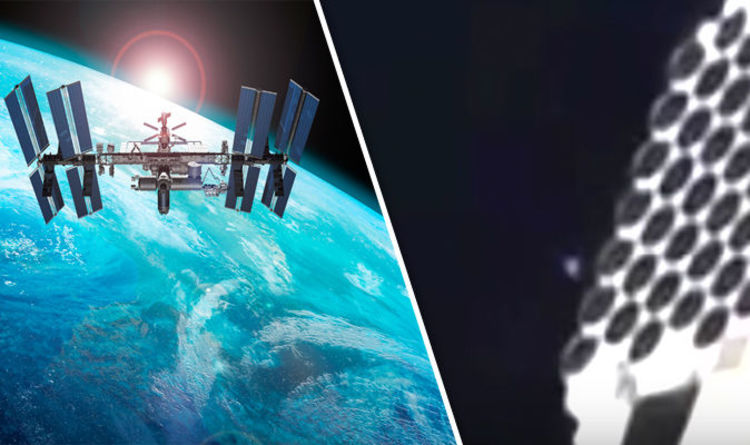 
The eerie looking spaceship was spotted on the ISS’s live cam, with eagle-eyed viewers spotting the UFO in the background.

The object seems to be moving away from the ISS, but as it does it looks as if it is changing shapes as it orbits around the Earth.

At first it begins looking like a circle of light before seemingly transforming into a more elliptical shape.

Alien hunters believe NASA recognised strange goings on in the live feed and sent out an emergency signal.

Prominent paranormal investigation site UFO Sightings Daily reads: “I was watching the live cam and noticed this UFO in the far distance.

“The UFO moved slightly and changed shape from a round appearance to a long cigar shape. Its also odd that a new NASA red screen kept popping up about six times during the sighting.

“I believe the new colour indicated an emergency that needs dealt with.a UFO. It may be a new AI system for detecting anomalies flying past.“

Other conspiracy theorists believe the change in shape was down to engines on the UFO.

One user wrote on a related YouTube video from UFO Sightings Daily: “It’s also got a bit of a blue haze surrounding it. Could be a coming from it’s propulsion system or perhaps a shield?”

Octopus Brains Evolved to Share a Surprising Trait in With Our Brains : ScienceAlert
An AI Found an Unknown ‘Ghost’ Ancestor in The Human Genome : ScienceAlert
Chilling Glimpse Into Our Future if We Survive Another Million Years : ScienceAlert
The Science Behind Why You Sprain Your Ankle So Often, And What You Can Do About It : ScienceAlert
A Tobacco Plant Has Been Engineered to Produce Cocaine in Its Leaves : ScienceAlert