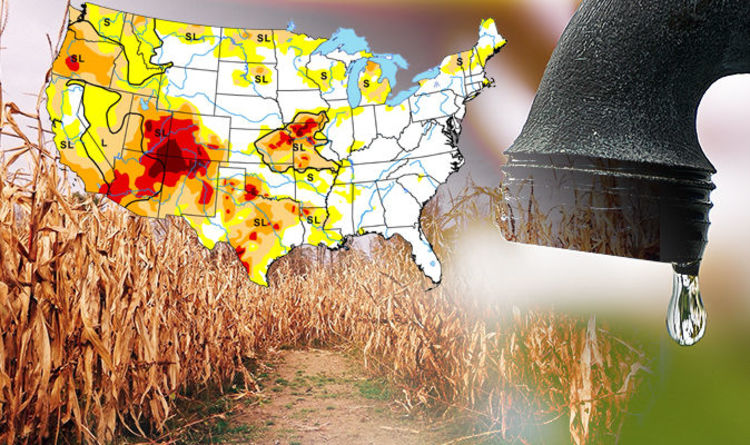 
Scorching heatwaves across the United States have contributed to massive wildfires, and to make matters worse the dry weather has also led to extreme droughts.

Large chunks of the country are now facing dire times due to the droughts.

According to Drought.gov – the official monitor of droughts in the US – 10 states are facing “extreme” or “exceptional” droughts, the highest categories in the ranking system.

According to the National Oceanic and Atmospheric Administration: “Abnormal dryness and drought are affecting over 131 million people across the United States.”

As a result, many farmers are on the brink of “financial ruin” due to their inability to grow crops.

Mark Fuchs, hydrologist for the National Weather Service, said: “That isolated nature really hurts some corn growers because they’re competing against other farmers in the Midwest that have had bumper crops.

“That puts a lot of them on the brink of financial ruin.”

Ryan Gordon, a hydrogeologist with the Maine Department of Agriculture, Conservation, and Forestry, told the Digital Journal: “People are starting to run out of water.”

On top of the drought, the US is battling against raging wildfires across the country.

US authorities said there are more than 100 major wildfires burning across the country currently, including three of the biggest in Californian history.

So far the infernos have scorched more than 3.3 million acres, according to the US National Interagency Coordination Centre.

Deep Brain Simulation Could Alleviate OCD When Other Treatments Have Failed : ScienceAlert
Bitcoin’s Climate Impact Is Bigger Than Beef Farming – And It’s Only Getting Worse : ScienceAlert
Secret Clues in Tutankhamun’s Tomb Reignite The Idea That Nefertiti Is Hidden Nearby : ScienceAlert
Superconductivity Model With 100,000 Equations Now Contains Just 4 Thanks to AI : ScienceAlert
Weight Lifting in Old Age Does More Than Just Keep Your Muscles Strong : ScienceAlert