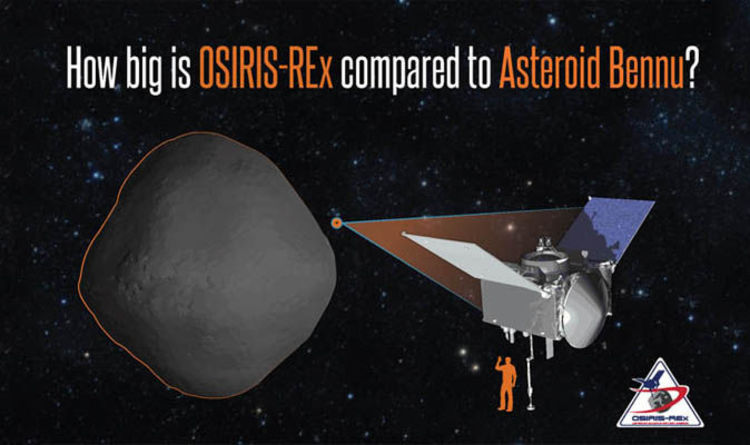 
The tiny spacecraft entered its final Approach Phase on Friday, August 17, after two years of travelling to get into position.

NASA’s engineers are now waiting with baited breath as OSIRIS-REx tries to land on the asteroid to collect samples as it brushes past Earth next month.

After spending nearly two years in the void of space, the NASA space probe will engage with Bennu on December 3 this year.

The Origins, Spectral Interpretation, Resource Identification, Security – Regolith Explorer (OSIRIS-REx) blasted off into space in 2016 on a collision course with Bennu.

Last Friday the spacecraft was still over one million miles (1.6m km) from Bennu.

But the spacecraft has already begun to map the giant space rock and its surroundings in search of potential hazards.

The preliminary observations will help OSIRIS-REx enter orbit around the asteroid.

Before the spacecraft briefly touches down on Bennu for a whole five seconds, OSIRIS-REx will carry out two test dives down to the space rock.

On the first pass of the asteroid, OSIRIS-REx will dive down to about 410 feet (125m) from Bennu’s surface, followed by a second lower dive.

Over the course of just five seconds, the spacecraft will “TAG” the asteroid using its so-called Touch-and-Go-Sample-Acquisition-Mechanism (TAGSAM) instrument.

The space probe’s tool will collect a sample of asteroid regolith by blowing nitrogen at Bennu’s surface to kick up bits and pieces of rock, dust and pebbles.

OSIRIS-REx will carry out up to three TAG attempts in order to maximise the chances of collecting a solid sample of Bennu’s rock.

NASA said: “After the spacecraft fires its thruster to back-away from Bennu, the mission team will measure the amount of sample collected by spinning the spacecraft with the TAGSAM arm extended.

“They will then compare the change in the spacecraft’s inertia with a proviso, empty TAGSAM spin to ensure that enough sample was collected.

“The spacecraft has three nitrogen gas canisters on board, allowing for three sampling attempts.”

Once the space probe successfully collects its samples it will map out a return trajectory to Earth, drifting away from Bennu to a safe distance.

Osiris-Res will fire off back to Earth on March 2021 for what is dubbed the “Return Cruise Phase”.

Asteroid Bennu is of particular interest to NASA scientists thanks to its size, composition and distance from Earth.

The space agency said Bennu’s size, composition and potentially dangerous orbit “make it one of the fascinating and accessible” near-Earth asteroids.

Asteroid Bennu measures approximately 1,640 feet (500m) in diameter and is classed as a B-type asteroid.

Bennu completes an orbit around the Sun every 1.2 years, or 436.604 days, and approaches Earth every 6 years.

Astronomers next expect Bennu to come within striking distance of Earth on September 25, 2135, and fear a “high probability of impacting Earth” in the late 22 century.

Scientists Are About to Fire Up The Most Powerful Laser in The US : ScienceAlert
The Real Reason For Using Flight Mode Is Not What You Think : ScienceAlert
Early Puberty in Girls Surged in The Pandemic, And We May Finally Know Why : ScienceAlert
We Have Our First Look at Neptune’s Rings in 33 Years, And They’re Glorious : ScienceAlert
A Stunning New 3D Model of The Cat’s Eye Nebula May Help Us Solve Its Mysteries : ScienceAlert