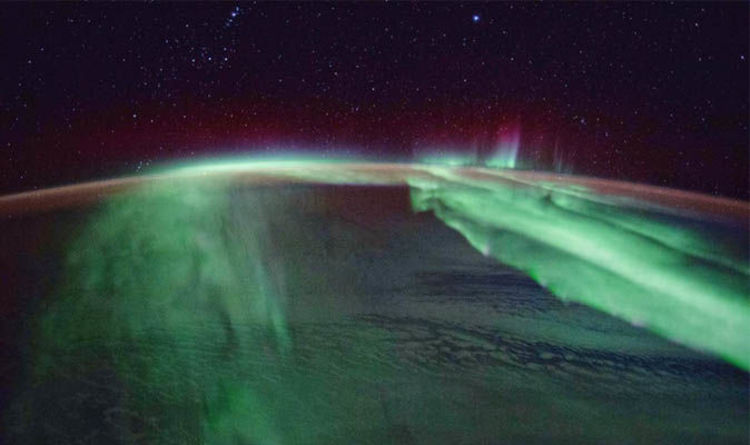 
The image, snapped hundreds of miles above the Earth, was taken by NASA astronaut Ricky Arnold.

The American took the picture of the Aurora when passing through the planet’s nightside on Thursday, August 23.

The NASA astronaut posted online: “Our old friend Aurora Australis, Southern Lights, has returned and is always a most welcome a visitor.”

Dr Gerst, a space flight engineer from the European Space Agency (ESA), said: “Mind-blowing, every single time. I wonder what early explorers thought when they first saw an aurora without ever having heard about it.”

The mesmerising Aurora effects caught on the ISS’s cameras are caused by charged particles ejected from the Sun battering the Earth’s atmosphere.

The supercharged particles excite the different gases found in the atmosphere to the point where they release photons of light.

Auroras typically shine in various colours of green, blue and purple depending on the atmospheric composition of the air.

Green auroras like the ones seen in the ISS pictures are typically associated with excited molecules of oxygen about 60 miles above the surface of the planet.

Rarer red auroras are produced by molecules of oxygen higher up in the atmosphere, up to 200 miles up.

NASA said: “The dancing lights of the auroras provide spectacular views on the ground and from space, but also capture the imagination of scientists who study incoming energy and particles from the Sun.

“Auroras are one effect of such energetic particles, which can speed out from the Sun both in a steady stream called the solar wind and due to giant eruptions known as coronal mass ejections.”

These streams of energy take anywhere between two to three days to reach the Earth.

Once they reach the planet, they trigger reactions in the upper atmospheres around the magnetic North and South Poles.

Auroras in the northern reaches of the planet are known as the Northern Lights or Aurora Borealis.

Auroras in the south, as seen in Mr Arnold’s picture, are called the Aurora Australis or Southern Lights.

Unless you find yourself in Antarctica, the best places to see auroras outside of the ISS, are in the Northern Hemisphere.

We May Finally Know Why Oceans in The Southern Hemisphere Are Getting So Warm : ScienceAlert
Bitcoin’s Climate Impact Is Bigger Than Beef Farming – And It’s Only Getting Worse : ScienceAlert
Hubble And Webb Pics Reveal DART Impact Was Even Bigger Than Expected : ScienceAlert
‘Unbelievable’ Video Shows 2 Bees Working Together to Open a Soda Bottle : ScienceAlert
Ancient Burial of a Young Girl Shows How We Carried Our Babies 10,000 Years Ago : ScienceAlert