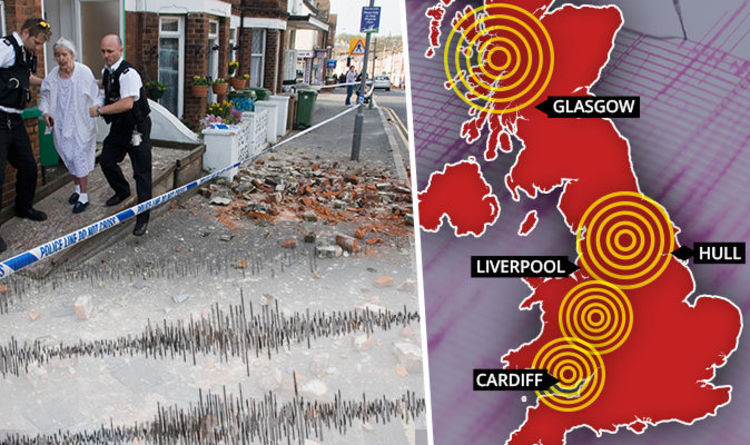 
This afternoon a 4.7 earthquake struck Swansea in south Wales, sparking an evacuation at a Swansea University campus and shaking buildings across England and Wales.

Last year an expert warned Express.co.uk the Welsh border region was especially vulnerable to earthquakes, as well as a number of other areas.

An earthquake as high as 6.1 on the Richter Scale has hit Great Britain in the past and David Galloway of the British Geological Society said it could happen again.

The seismologist told Express.co.uk in January 2017: “There are 200 earthquakes [in the UK] every year. Only two per month are of a reasonable size felt by people on the street.

The 1931 Dogger Bank earthquake caused damage across the UK – as well as the deaths of two people. Striking off the coast of the east of England, it saw chimneys fall off roofs, cliffs collapse, church spires twist and the head of a waxwork in London’s Madame Tussauds fall off.

It also sent a small tsunami wave towards England, where it caused no damage.

In terms of destruction caused, however, the most deadly earthquake to strike the UK occurred in Colchester in 1884.

More than 1,250 buildings were damage across Essex and a child was killed as large waves damaged boats at the coast.

Mr Galloway warned of the impact of a large earthquake in a UK city.

He said: “If [something on the scale of the 1931 quake] were to happen in a heavily populated area like Manchester or Liverpool, quite a lot of damage could occur.”

An earthquake measuring 6.1 on the Richter scale could cause “a lot of damage in very populated areas”, according to the University of Michigan.

Mr Galloway also pinpointed specific areas of the UK which are more susceptible to earthquakes than others.

He said: “Most of the action is in north-west Scotland, the Welsh border areas and north Wales.

“There used to be more in the central midlands due to the mines sparking earthquakes but because the coal industry is almost dead this has stopped.”

Other areas in Britain and Ireland, such as the east of England and the entire island of Ireland, experience very few earthquakes.