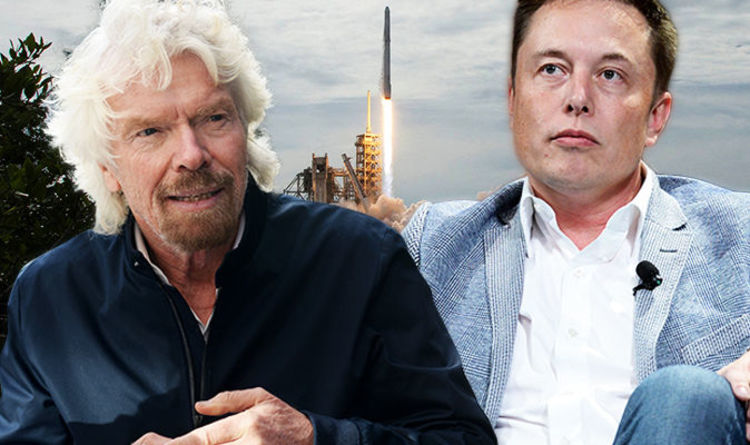 
The rivalry between two of the world’s richest businessmen is shaping up to be an intergalactic battle of the billionaires.

The successful expedition was watched by millions worldwide – and Mr Musk is already getting ready for his next venture tomorrow, sending internet satellites into space as part of a mission to provide a worldwide wifi network.

But Richard Branson has already stated his intention for Virgin Galactic, a Virgin Group spaceflight company, to put the first tourists in space and is now saying he will be “very disappointed” if he doesn’t attempt this feat within the next few months.

A space race definitely looks on the cards after Richard Branson admitted to being  “a little bit jealous” of Elon Musk’s Falcon Heavy launch.

The Virgin Galactic boss said of the blast-off to CNN: “They all just did fantastic”, adding his space employees were now “thinking about what we can do to upstage that one”.

The world’s 53rd richest man says he wants to reduce the “risk of human extinction” by establishing a human colony on Mars.

His journey to Mars orbit is expected to take around six months with his Starman and roadster travelling roughly about 140 million miles as part of a 243 million elliptical tour of the sun.

Mr Branson, ranked 324th on Forbes’ rich list, is hoping to rocket his clients into space but previous promises of imminent Virgin Galactic voyages have so far proved fruitless since its 2004 inception.

Virgin Galactic has spent the last 13 years trying to launch commercial spaceflights but has been hindered by setbacks including a fatal crash in 2014.

A maiden flight was planned as far back as 2009 on the VSSEnterprise.

Last October, Branson is said to have told a business conference in Finland that it will be “about three months before we are in space, maybe six months before I¹m in space”.

In January a new positive test flights led Virgin Galactic to announce talk of a possible space launch this year.

During his interview with CNN, Branson said he would be “very disappointed” if his company didn’t launch into space with people on board in the next few months.

He said: “I hope that Virgin Galactic will be the first of the three entrepreneurs fighting to put people into space to get there.”