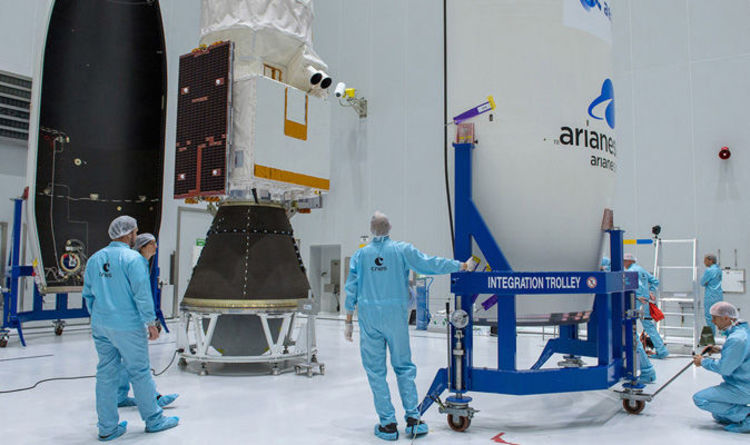 
And science minister Sam Gyimah has pointedly hailed it as further evidence of the vital role Britain plays within the European Space Agency.

Flying at 200 miles above the surface of the Earth, the powerful laser on the European Space Agency’s (ESA) Aeolus spacecraft will beam down into the atmosphere to measure wind speeds.

The completely new technique could radically improve the accuracy of weather forecasting, helping to protect people from disasters like floods and hurricanes across the world.

The spacecraft was built by Airbus Defence and Space in Stevenage, while other British businesses have provided critical elements to the mission, including a camera, software and propulsion systems.

The extent of UK participation was a result of the UK Space Agency’s strong, ongoing support of ESA’s Earth Observation Envelope Programme, which aims to benefit industry and science.

Mr Gyimah said: “The Aeolus mission is a great example of the potential real-world impacts that space can have on Earth.

“Its data will lead to more reliable weather forecasts that can be used by farmers, seafarers, construction workers and others to improve productivity and safety.

“Space is a key part of our modern Industrial Strategy and it is work like this that shows how vital our role in the European Space Agency is in bringing real benefits to UK companies.”

James Cotton, Satellite Winds Scientist, at the Met Office, said: “The Aeolus mission aims to improve the global coverage of wind profile observations, including areas where in situ wind measurements are currently lacking, such as over the oceans, in the tropics and the Southern Hemisphere.

“Within numerical weather prediction, we expect the Aeolus winds to be particularly useful for improving our analysis of the atmospheric state in the tropics, a region where we know the model wind errors are large.”

Aeolus will be launched via a Vega rocket from Europe’s Spaceport at Kourou in French Guiana tonight at precisely 21:20:09, Universal Time (UTC), with the launch be available to view online here

Colin Paynter, Managing Director Airbus Defence and Space Ltd, said: “The UK contribution to Aeolus, by the alliance of UK SMEs and established players led by Airbus, was first class, delivering a revolutionary Earth observation satellite that will give wind profile data in near real time, improving weather forecasting and helping to bring the benefits of space down to every citizen on Earth.

“Airbus was honoured to lead Team UK to deliver this spacecraft.

Despite European Union attempts to exclude this country from the Galileo satellite system, Britain’s space industry is going from strength to strength.

Two years ago the UK committed £1.26billion (€1.4billion) towards a range of ESA space programmes and the invests almost £315billion (€350 million) annually with ESA, providing us with access to over €5 billion per year of ESA research and technical expertise.

The UK Space Agency is driving the growth of the space sector as part of the government’s Industrial Strategy with major initiatives including the National Space Test Facility at Harwell, and the UK continues to be a leading member of the European Space Agency, which is independent of the EU.

In July, the government also committed £31.5 million to support the development of a spaceport in Sutherland, Scotland, which could be the first in mainland Europe.

There Are New FDA Safety Warnings About Breast Implants. Here’s What We Know : ScienceAlert
Engineers Gave a Car a Pair of Eyes to Make Future Roads Safer For Pedestrians : ScienceAlert
REM Sleep May Exist to Heat Your Brain Up From The Inside : ScienceAlert
The Tonga Eruption’s 50 Million Tons of Water Vapor May Warm Earth For Months to Come : ScienceAlert
Early Puberty in Girls Surged in The Pandemic, And We May Finally Know Why : ScienceAlert