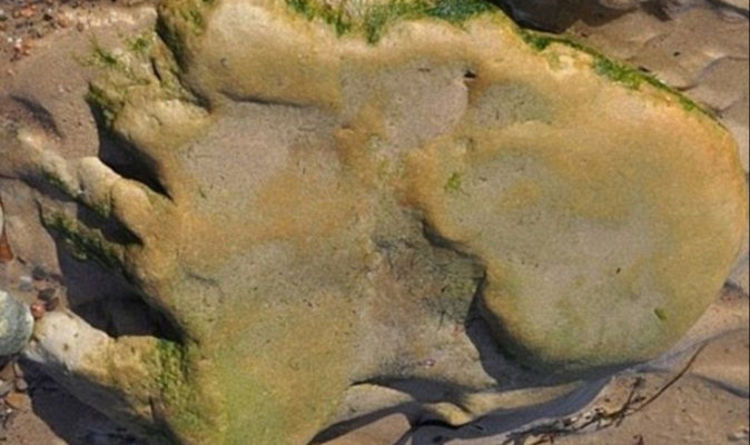 
Footprints dating back 170 million years were discovered in sandstone in rocks near Inverness.

The dinosaur tracks are almost perfectly preserved and are clearly marked with a foot, heel and four toes.

The only previously discovered footprints made in Scotland were found on the Isle of Skye and the Hebrides Basin, making the new findings the first of its kind.

It is believed they once belonged to a Sauropod – an older cousin of the fearsome Tyrannosaurus Rex.

The discovery was made by Dr Neil Clark, vice president of the Geological Society of Glasgow, who said that the exact location of the discovery has not been made public so that more research can be conducted.

Speaking to the BBC, Dr Clark added: “I have frequently bemoaned the fact that dinosaurs have not been found elsewhere in Scotland.

“But I now have discovered some new dinosaur footprints in a completely different location.

“They are from a completely new part of Scotland for dinosaurs and will add significantly to our understanding of dinosaurs of that age in Britain.”

The next step by Dr Clark is to launch a crowdfunding mission in the hope of raising £5,000.

In April of this year, 170 million-year-old tracks were discovered in a muddy lagoon off the north-east coast of what is now the Isle of Skye.

These were the second set of dinosaur footprints found on Skye, with the first being discovered in 2015, although the latest discoveries were made in older rocks.

The find is considered to be globally important as it is rare evidence of the Middle Jurassic period, from which few fossil sites have been found around the world.

Dr Steve Brusatte, from the University of Edinburgh’s School of GeoSciences, who led the field team, said: “The more we look on the Isle of Skye, the more dinosaur footprints we find.

“This new site records two different types of dinosaurs – long-necked cousins of Brontosaurus and sharp-toothed cousins of T. rex – hanging around a shallow lagoon, back when Scotland was much warmer and dinosaurs were beginning their march to global dominance.”

Shimmering ‘Lakes’ Under The South Pole of Mars Might Be Something Else Entirely : ScienceAlert
3 Major Aquatic Animal Groups Can Trace Their Lineage to This Ancient Armored ‘Worm’ : ScienceAlert
Experts Estimate The Scale of The Nord Stream Pipelines Methane Leak : ScienceAlert
Biology Inspires a New Kind of Water-Based Circuit That Could Transform Computing : ScienceAlert
Weight Lifting in Old Age Does More Than Just Keep Your Muscles Strong : ScienceAlert