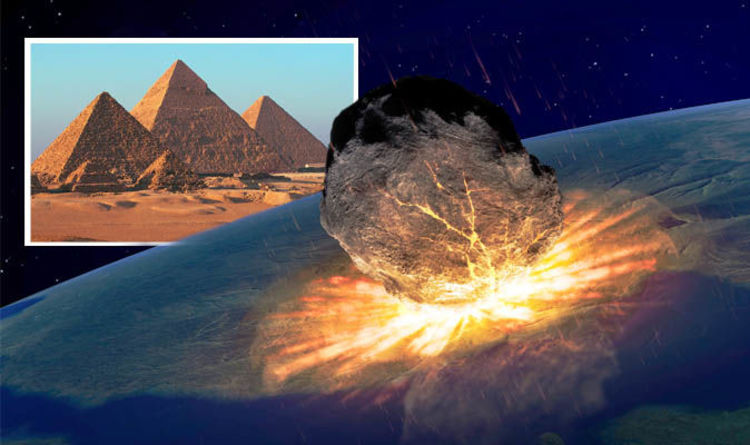 
The barreling Asteroid 2016 NF23 will skim past the planet Earth shortly after 1am UK time on Wednesday, August 29.

The monstrous space rock is flying towards the planet at a breakneck speed of more than 20,000mph or nine kilometres per second.

At this incredible speed, Asteroid NF23 moves faster than the long-retired Concord aircraft which reached cruise speeds of 1,354 mph (2,179 km/h).

Because of its formidable size, the asteroid is listed on NASA’s list of so-called “Potentially Hazardous Asteroids”.

Potentially hazardous asteroids are all space rocks larger than 459 feet (140 m) in size.

Dr Detlef Koschny, head of the Near-Earth Objects team at the European Space Agency (ESA), said even smaller asteroids have a chance to cause great damage.

He told Space Daily: “If a 100-metre asteroid hit Earth, it would cause significant damage in an area the size of Germany, and even affect the surrounding region.

“But asteroids of this size don’t strike Earth very often. Maybe every 10,000 years on average.”

NASA revealed the asteroid will miss the planet by more than three million miles (4.8million km) or just 0.03377 astronomical units.

The same distance is equal to roughly 13.4 times the distance between the Moon and the Earth.

If the giant asteroid threat were to slam into the planet at top speed, it would instantly kill millions and wipe out an entire city.

The repository of dangerous asteroids and comets lists every space rock barrelling dangerously close to Earth.

In August alone, NASA has estimated nine NEOs will zoom past the planet.

The closest of these NEO asteroids, Asteroid 1998 SD9, will join NF23 next Wednesday when it flies within 4.22 lunar distances of Earth.

Asteroid SD9 will fly much closer than NF23, making its close approach within just over one million miles (1.6million km) of our home planet.

The giant asteroid will skim past the planet once again in the morning hours on April 23, 2020.

Two months from now, Asteroid NF23 will fly past Venus as it completes its trip around the Sun.

Secret Clues in Tutankhamun’s Tomb Reignite The Idea That Nefertiti Is Hidden Nearby : ScienceAlert
We May Finally Know Why Oceans in The Southern Hemisphere Are Getting So Warm : ScienceAlert
Biology Inspires a New Kind of Water-Based Circuit That Could Transform Computing : ScienceAlert
3 Major Aquatic Animal Groups Can Trace Their Lineage to This Ancient Armored ‘Worm’ : ScienceAlert
It Turns Out There Is Such a Thing as Good Gossip, According to New Research : ScienceAlert