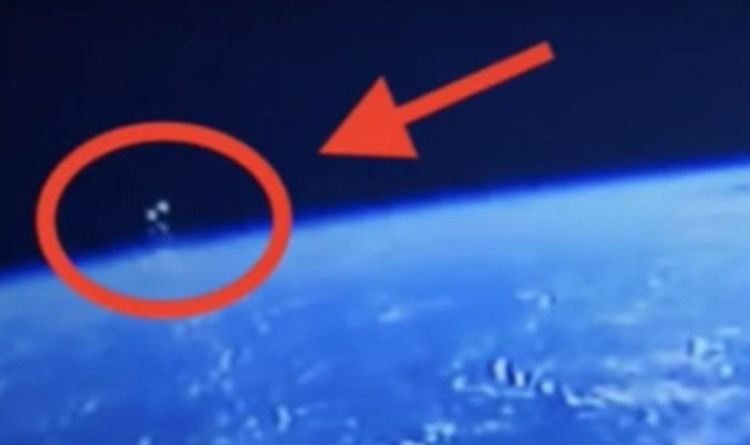 
In the bizarre video, the trio of supposed “crafts” are said to be visible above western Australia.

In the short clip the space station approaches the objects but they appear to then move out of view.

The video was uploaded to YouTube with the description: “A very obvious group of some sort of ships or crafts were visible from the ISS on March 17, holding steading high above the Earth.

“As the ISS moved closer in the direction of these ships they disappeared.”

UFO hunters have been debating the mystery online.

One viewer posted on YouTube: “It looks like little ships harnessing water from our clouds with some type of tractor beams.”

Conspiracy theorists have claimed for months that the ISS is being watched by UFOs, Dailystar.co.uk reports.

When claims were made last July of an alien mothership tracking the ISS, one UFO hunter posted on YouTube: “It’s an interstellar mother ship, watching what NASA is doing, as NASA have lied since the first encounter with UFO.”

There are been scores of similar videos taken using live feed footage uploaded to UFO websites after alleged anomalies were spotted.

Top UFO hunter Scott C Waring once said the ISS was being visited by aliens on an almost daily basis.

Scott C Waring, editor of ufosightingsdaily.com, said: “We are seeing UFOs in the livestream on an almost daily basis as if they are monitoring the ISS.”

And Brett and Blake Cousins, of the Thirdphaseofmoon YouTube channel claim the ISS is “being tracked” by UFOs.

Last month, another clip from the ISS appeared to show a pink smog-like cloud descend on the Earth.

However, sceptics and even NASA came out to rubbish the claims.

The explanations were that most of these sightings were reflections of the ISS itself, lens flares within the camera, space junk or ice particles.

However, it did little to stem the flow of uploads.

No One Likes Commutes, But They May Actually Be Good For Mental Health, Study Finds : ScienceAlert
Ultra-Processed Food May Exacerbate Cognitive Decline, New Studies Show : ScienceAlert
Lightning Strikes Create a Strange Form of Crystal Rarely Seen in Nature : ScienceAlert
Incredible Footage Shows Planets Circling a Star Light-Years Away : ScienceAlert
How a Dead Girl in Paris Wound Up With The Most-Kissed Lips in All of History : ScienceAlert