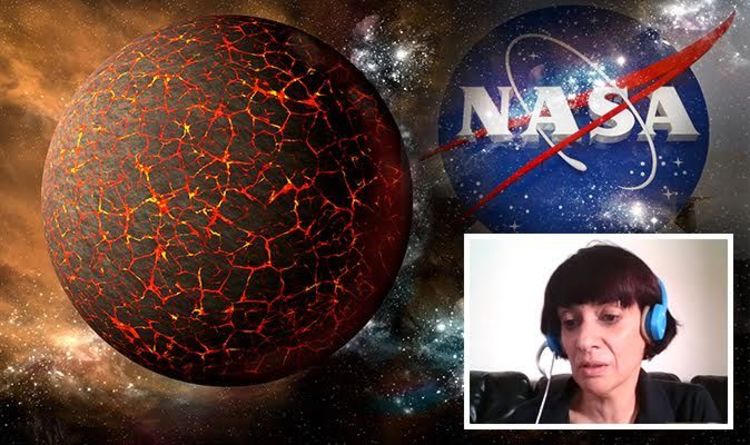 
Nibiru believers are convinced the “rogue system” is making its way from the outer solar system inwards, where it will wreak havoc on Earth as it passes at about four million miles away, but causes the poles to switch and great earthquakes and volcanic eruptions.

Dr Claudia Albers, a nuclear physicist, formerly of The University of the Witwatersrand, in Johannesburg, South Africa, has become one of the most prominent Nibiru believers who claims the Earth really is at threat.

She has written a number of books on the subject including Planet X The Awakening Now.

Despite NASA making an official statement that there is no rogue mini solar system orbiting our sun, she challenged the US space agency to prove it.

She has written and appeared in videos for the conspiracy theory website Planetxnews.com, which pushes the myth.

In a video on the ‘Planet X News’ YouTube channel she talked viewers through an article she wrote entitled ‘Challenging NASA To Prove That Planet X Does Not Exist’.

She questioned earlier statements made by NASA scientist Dr David Morrison, who rubbished the myth.

In the video she said: “I challenge NASA for the proof that Planet X does not exist.”

In the article Dr Albers claims to have seen dying stars that are part of the Planet X system, which “emit infrared light” visible in close up images of the Sun taken by specialist NASA telescopic cameras on space probes.

She claims they are “much denser” than planets otherwise they would be vapourised by the Sun.

NASA scientists have, since the Eighties, been saying there is theoretically another planet at the edge of the solar system, but it has yet to be conclusively proved.

However, if it is there it poses no threat to Earth and will come nowhere near us, they say.

Yet, Dr Albers is not convinced by this.

She put forward a staggering theory in her article.

She said: “It seems that the object is here and it is not alone because there is evidence that there are many of these objects in the inner solar system and they have been coming in towards the Sun for many years.”

She went on to say the interstellar bodies make magnetic connections with the Sun and create coronal holes.

Worse still she claimed this would weaken the Sun and create more solar storms that will impact on Earth.

In the video she said Earth was at risk from volcanoes and increased seismic activity from Nibiru.

She finished her article bringing religion into the mix.

She added: “The Planet X system stellar cores will negatively impact life on Earth and I therefore recommend getting to know our creator, Jesus, as the only way to find the peace and safety that we all desperately need.”

None of these theories are backed by mainstream scientists.

University bosses have since moved to distance themselves from her theories.

Professor João AP Rodrigues, head of the School of Physics, said in a statement: “The University has recently become aware of various public assertions purporting to suggest that there may be a Brown Dwarf star in the inner Solar System.

“These comments appear to be the subject of much debate on social media platforms and are attributed to Dr Albers, a lecturer in the School of Physics.

“The essence of the claim is that this Brown Dwarf is drawing the energy out of the Sun.

“The University supports the freedom of people to hold and discuss contrarian views.

“However, insofar as the sciences are concerned the principles of the scientific method must guide the process.

“The ultimate test of any hypothesis must be its exposure to experimentation.

“Only those that have stood the test of peer review can be held up as truths.

“Debate outside this framework constitutes bad science and the University distances itself from such practice.”

The Nibiru myth emerged in 1976, when writer Zecharia Sitchin claimed that two ancient Middle Eastern cultures – the Babylonians and Sumerians – told of a giant planet – Nibiru – that orbited the Sun.

NASA’s Dr Morrison said: “There is no credible evidence whatever for the existence of Nibiru. There are no pictures, no tracking, no astronomical observations.

In a debate about Nibiru believers on Quora.com, mathematician Robert Walker posted: “Her ideas just make no sense and I find it hard to credit that someone so qualified could come to believe such things.

“Her speculations in this area of course are not peer reviewed and haven’t been submitted to scientific journals.

“Yet she gives youtube video presentations, in which she claims that her ideas are correct.”