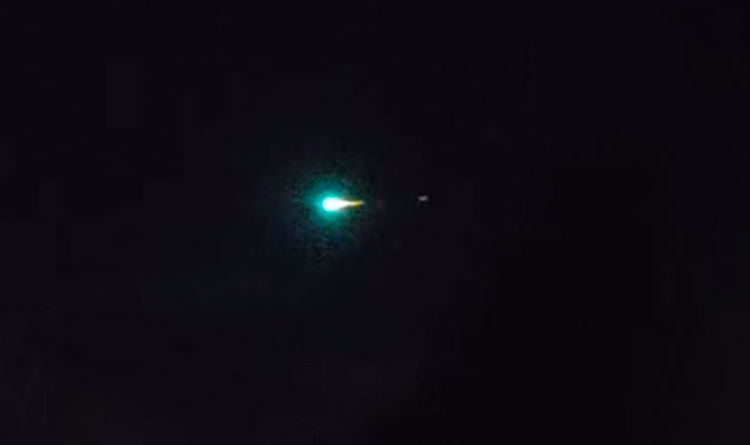 
Residents preparing for their New Year’s Eve celebrations reported the mysterious object as it emerged in the skies above Britain.

At least 679 reports were made to the International Meteor Organization, predominantly in England and Scotland, after the giant ball of light soared across across the New Year’s Eve night sky.

On Twitter, International Meteor Organization said: “Probably one of the last bright fireballs of 2017, but what a fireball!

“More than 150 witnesses reported a very bright meteor observed around 17h 35min UT, on December 31, and reports keep coming in!”

“Many observers reported green colour and fragmentation at the end.

“The meteor was apparently moving quite slowly.”

Amazed onlookers also joined in to share their experiences on social media.

Lin Mathers wrote on Twitter: “Bright blue/green light sped across the sky, over the castle towards Denaby Crags.

“So low in the sky, genuinely thought it was coming to land. Stunning sight! Breathtaking.”

The International Meteor Organization quashed rumours of an alien visitation, telling curious witnesses they had seen a meteor that had split in two upon entering Earth’s atmosphere.

It is likely part of the annual Quadrantid meteor shower, which runs from December 22 to January 17.

Engineers Gave a Car a Pair of Eyes to Make Future Roads Safer For Pedestrians : ScienceAlert
A Stunning New 3D Model of The Cat’s Eye Nebula May Help Us Solve Its Mysteries : ScienceAlert
Experts Estimate The Scale of The Nord Stream Pipelines Methane Leak : ScienceAlert
Shimmering ‘Lakes’ Under The South Pole of Mars Might Be Something Else Entirely : ScienceAlert
Behold, The Epic Last Images Taken by NASA’s Asteroid Redirection Test Spacecraft : ScienceAlert