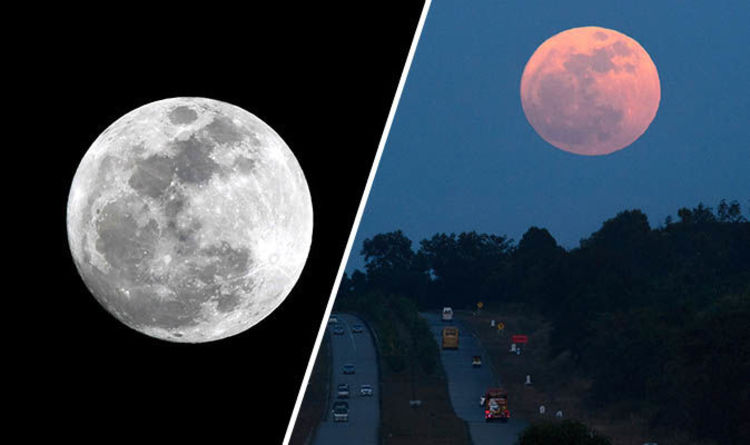 
The supermoon will rise in the western hemisphere on New Year’s Day – January 1 – in the late evening hours.

However those in the eastern hemisphere will be able to view the supermoon in the evening on January 2 – one day later.

The moon will turn precisely full at the same instant worldwide – January 2 2018 at 2.24 universal time – however the date and time of the full moon will vary according to your time zone.

What time will the supermoon rise in the UK?

The supermoon will peak at around 2.24am tonight and will appear up to 7 percent bigger than an average full moon.

The Met Office forecast for tonight is a clear and frosty night, but there will be cloud and rain in the UK early on Tuesday morning.

The clear conditions are perfect for watching the supermoon once it reaches the highest point in the sky during the early hours of Tuesday morning.

What time will the supermoon rise in the USA?

In North American and US time zones the supermoon will fall on the evening of January 1 at the following times:

Tonight’s supermoon is also known as the “Wolf Moon” as it is the second moon in a supermoon trilogy.

The first in the supermoon trio was on December 3 2017 and the third supermoon will appear in the night sky on January 31.

The 2018 Wolf Moon is also known as a “supermoon” which means it coincides with the moon’s closest approach to Earth – known as the perigee.

A super full moon looks around 12% to 14% bigger than its counterpart, the Micromoon, and up to 7% bigger than an average Full Moon.

Ancient Burial of a Young Girl Shows How We Carried Our Babies 10,000 Years Ago : ScienceAlert
Amazing New Fossils Provide Earliest Known Traces of The Evolution of Our Jaws And Limbs : ScienceAlert
Engineers Gave a Car a Pair of Eyes to Make Future Roads Safer For Pedestrians : ScienceAlert
Deep Brain Simulation Could Alleviate OCD When Other Treatments Have Failed : ScienceAlert
Fossil-Filled Australian Caves May Be 500,000 Years Older Than We Thought, Study Finds : ScienceAlert