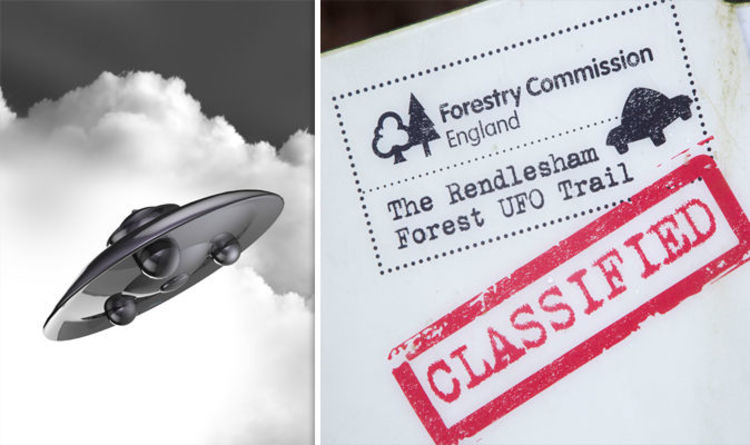 
On December 26, 1980, a patrol around RAF Woodbridge reported seeing lights, which appeared to land in the near by Rendlesham Forest.

They rushed to the site, thinking the lights might be a crashed human aircraft, however, they claimed to have found a round, glowing metal object with coloured light that scared animals in a nearby farm.

Now, paranormal investigators have returned to the scene of the crime and spotted more strange activity at a place dubbed the UK’s Roswell.

Over the course of October 8 and 9, a group known as Ghostech Paranormal Investigations spent time in the Rendlesham Forest searching for alien activity.

To their surprise, they spotted what they believe was UFO and even obtained footage.

As the bright lights of a UFO were seen in the distance, Jeff Young, lead investigator of Ghostech Paranormal Investigations told express.co.uk: that their walkie-talkies stopped working and that “there was not one bird, squirrel, owl, no wildlife” seen during their investigation.

Mr Young said: “On the first night we managed to not only see the lights for ourselves, but we also captured them on film.

“We were the only people in the forest and we had to walk three miles through the forest to reach the location so there are no roads or any other explanation for what we had witnessed.

“Knowing where we had seen the UFO’s moving within the tree’s, on the second night we positioned our camera’s facing those area’s but this time I would walk a half a mile to the opposite side so I could observe the whole area as well as my team being positioned at the landing site so we may get a better look at these objects.

“This time we all saw the UFOs moving through the tree’s and again captured them on film but this time much more clearer than before.”

At this point, Mr Young says that Apache helicopters hovered above the investigators, seemingly tracking the bright lights in the forest.

He continued: “As we watched the UFO’s there then appeared a Apache Longbow helicopter above me, and it then made its way over to where the rest of my team was at the landing site, the helicopter circled us several times where then another joined it followed by a third.

“We then realised that they had also been tracking these UFOs as well as us with our cameras.”

The team then decided to leave the forest as they feared persecution and having their evidence removed.

After the original Rendlesham Forest incident of 1980, Army recruits returned to the site the next morning and all they found were a number of triangular impressions on the ground.

A witness of the event, retired U.S. Airforce officer Steve Longero, said December 2016: “I think it was something not from this world.”

He said of the object found in the woods: “From what I remember it was like aglow, it was really glowing like a reddish, greenish light.

“It was really glowing, like something was really hot and it was just glowing.”

He also recalled how the object vanished. He added: “As people were getting close to this thing it kind of came nearer to us and then it would go forward and then go back and all of a sudden it just disappeared, like something out of Star Trek, it was like warp speed and we were all ‘what was that?’”