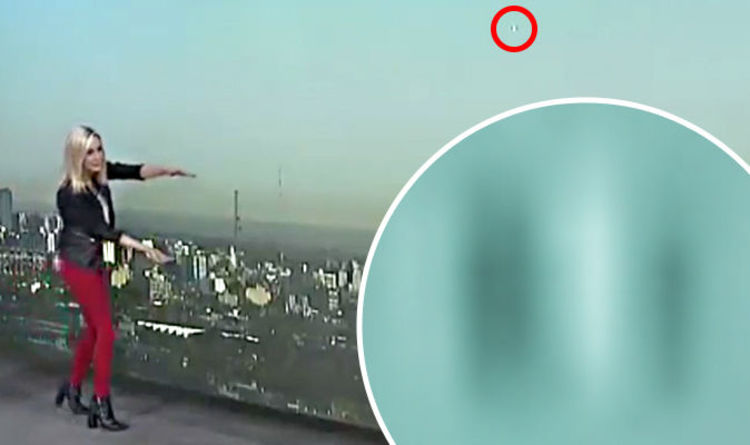 
A bright light was caught travelling across the background screen during a live news broadcast in Argentina. The two presenters quickly spotted the cube-shaped object and were keen to point this out to the viewers. The news broadcast rapidly went viral, with alien hunters keen to point out that this is strong evidence that extraterrestrials are visiting Earth.

The UFO appears to have no wings or propellers, which has led some to dismiss any suggestions that it is a plane or helicopter, while it is also seemingly moving too fast to be considered a balloon.

“This box shape is actually more common than you might think. Without wings, propellers, jets this boxy UFO moves across the sky at a very high speed, much too fast to be a balloon.

“Remarkable, and this is 100 percent proof that aliens are trying to gentle their way into the hearts and minds of the public.”

Argentina is something of a hotspot for UFO sightings, so much so that a UFO ‘landing pad’ was built in the wilderness of Argentina by a man who claims aliens told him to create the site.

The larger monuments are surrounded by smaller pieces and can be seen from the skies, which would be handy for any UFO’s driven by aliens as they near Earth.

The site attracts hundreds of visitors a year and Mr Jaisli decided to build it when he claims he received a “telepathic message” from extraterrestrials in which they told him they needed a place to land when they arrive at our planet.

He told Argentine newspaper El Tribuno: “I was in Fuerte Alto with my neighbour Luis. It was midnight on November 24, 2008.

“’It’s a UFO night,’ I said to Luis. And the sentence was not over, when two luminous objects advanced about 200 meters above the Calchaquí River.

“They were solid, circular and like burnished metal. I do not know why, but mentally I asked them to come closer. And they did it!

“They asked me telepathically to build the airport.”

Colossal Discovery on Mars Could Drive Surging Magma Under The Surface : ScienceAlert
Earth’s Oxygen Came From an Unexpectedly Deep And Hot Source, Study Suggests : ScienceAlert
Humans Keep Growing an Extra Artery in Their Arms, And This Is Why : ScienceAlert
Fusion Technology Is Reaching a Turning Point That Could Change The Energy Game : ScienceAlert
Mysterious Tendrils Inside The Brain May Control Our Perception of Time : ScienceAlert