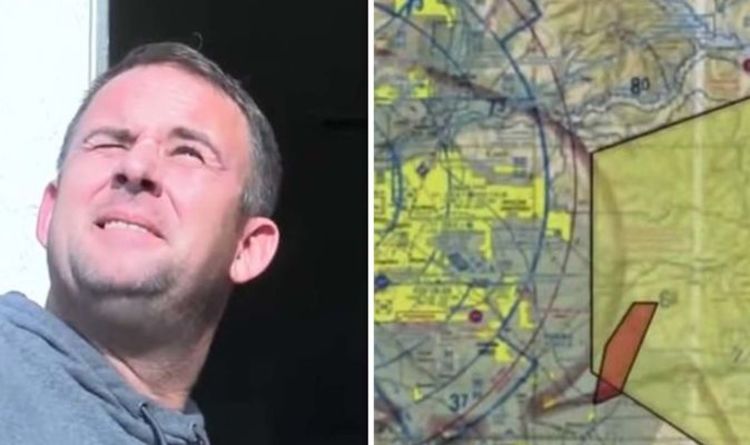 Local residents of Mesa, Arizona spotted a mysterious bright orb in the night sky over the weekend, prompting a panic among witnesses. To add to the mystery, officials at nearby military bases have denied any involvement following claims it was a top-secret military test. The footage of the incident shows a bright orb hovering silently in the night sky last Sunday night.

In the video, after every few moments, the object appears to drop what looks to be flares towards the ground.

One eyewitness Kerry Burnett said: “It was pretty bright, it was about straight up over here, and it went straight that way, stopped, and it didn’t seem like it was too far.

“It started kind of moving diagonal across, trying to figure out which way it was heading.

“And as it did that’s when we noticed it started dropping things from it.”

Local residents of Mesa, Arizona spotted a mysterious bright orb in the night sky over the weekend (Image: IG)

The object appears to drop what looks to be flares towards the ground (Image: IG)

Another witness, Doug Maier, added: “It wasn’t just us. Our neighbours next door – they were out; they weren’t even filming.

“They were more in amazement, like statues just sitting there watching it.”

He rejected claims that the footage showed a training exercise, such as US military aircrafts dropping flares.

Mesa sits just 30km east of Phoenix, which was host to a similarly mysterious sighting in 1997.

The so-called Phoenix Lights phenomenon sparked widespread hysteria at the time, and remains unexplained to this day.

Federal Aviation Administration officials, officials from the nearby Luke Air Force Base and the Army National Guard all denied involvement (Image: IG)

Federal Aviation Administration officials, officials from the nearby Luke Air Force Base and the Army National Guard all denied involvement in the bizarre orb.

Pressed further by local news broadcaster KNXV-TV, army officials admitted they could not explain the nature of the lights.

Mr Maier, who posted his video to Facebook, drew a frenzy of responses – including a wide range of theories and explanations.

He said: “Some said it may be an aircraft, others said aliens or a comet.”

Earth’s Oxygen Came From an Unexpectedly Deep And Hot Source, Study Suggests : ScienceAlert
Forests at Risk of Burning an Extra 30 Days a Year Without Climate Action : ScienceAlert
Crocodiles Seem to Be Thriving in a Toxic River That’s More Like a Sewer. Here’s Why : ScienceAlert
Oldest Known Dog Bone Hints Our Best Friends Were With Us Earlier Than Thought : ScienceAlert
Mummies With Golden Tongues Discovered in Ancient Egyptian Necropolis : ScienceAlert