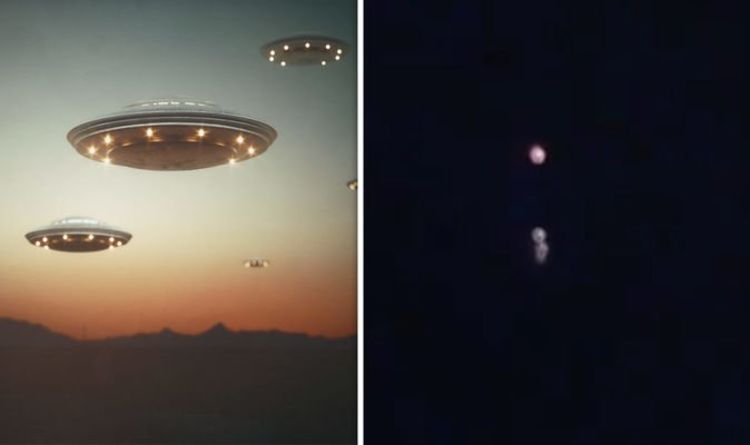 On Sunday, December 8, a couple in Mesa, Arizona, spotted the strange lights hovering near high in the sky. The object, which has caused confusion among the public and the military, was seen moving erratically and in all directions. There is yet to be an official explanation of what exactly the oddity is, which has led to explanations ranging from top secret military exercises to alien invasions.

Kerry Burnett, an eyewitness of the orb, told KNXV-TV: “It started kind of moving diagonal across, trying to figure out which way it was heading. And as it did that’s when we noticed it started dropping things from it.

“It was a cloudy night and had drizzled off and on. Regular planes had been flying by since we can see the flight path for the airport.

“All of a sudden I saw this bright glowing orange light. I thought it was a planet or a star at first and then I realised ‘oh that’s close and it’s moving towards us’.

“Then ‘boom’ it started dropping what looked like orange fireballs or something that travelled for a few seconds before they faded out and disappeared.”

‘Alien’ sighting above Arizona as strange lights appear ‘It may be aliens’ (Image: GETTY • DOUG MAIER)

Doug Maier, Ms Burnett’s fiancé, added: “It wasn’t just us. Our neighbours next door – they were out; they weren’t even filming.

“They were more in amazement, like statues just sitting there watching it.”

Mr Maier uploaded the footage to Facebook where he was inundated with theories.

He said: “Some said it may be an aircraft, others said aliens or a comet.”

“Some said it may be an aircraft, others said aliens or a comet.” (Image: DOUG MAIER)

The appearance of the lights had many Arizona residents reminiscing of the Phoenix Lights.

The Phoenix Lights Incident became a phenomenon from March 13, 1997r, after thousands of people began telling of seeing huge triangular UFOs drifting over Arizona and the city of Phoenix.

The sizes varied from a Boeing 747 to multiple football fields.

Five lights were seen in a formation by thousands of people over three hours from 7.30pm to 10.30pm.

On Sunday, December 8, a couple in Mesa, Arizona, spotted the strange lights hovering high in the sky (Image: DOUG MAIER)

The sightings took place across a 300-mile area from Phoenix to Tucson.

Some claimed the sightings were caused by the military setting off flares during an exercise at the time.

However, officials from the local Luke Air Force Base (AFB) confirmed to KNXV-TV that no tests were underway.

Ms Burnett continued: “The interviewer informed us of his research, speaking to Luke AFB who confirmed it was nothing from them.

“He also stopped at a place where he saw an FAA member and showed him the video, and that too was inconclusive.”