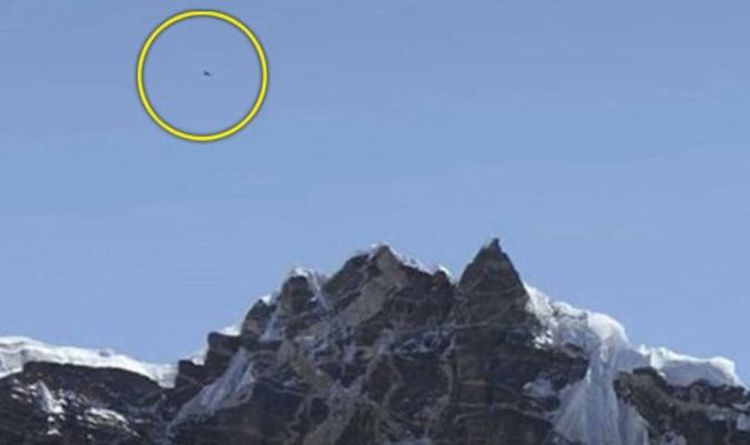 
UFO hunters claim the spooky object is unexplainable and cannot possibly be a drone or helicopter due to the altitude.

The craft was spotted after mountaineer and filmmaker David Breashears stitched together 477 images as part of a two-billion-pixel photograph in 2012.

The mosaic image is intended to show the mountain in all its glory and stretches from basecamp to the sky above, Dailystar.co.uk reports.

However, the famous mountain has been overshadowed by the bizarre object above it after footage was uploaded to YouTube channel UFO Today.

The video description reads: “When we zoom in on one of the mountains left of Mount Everest, we can see a UFO flying above the summit.

“The object resembles a flying disc of some sort and it’s clearly there since we can see its silhouette.

“Judging its height from Mount Everest it’s safe to say this object is flying way above the height where helicopters or drones would operate.

“We don’t have any additional information on the object but it’s interesting to see it flying above one of the highest mountains in the world.”

Conspiracy theorists also note the long-standing rumours of underground bases in the Himalayas.

And last year, declassified CIA files revealed seven sightings of UFOS in the skies above Nepal and neighbouring India in 1968.

However, the footage has been ridiculed by specialist paranormal debunkers.

Scott Brando who runs website ufoofinterest.org said it was likely to be just a blurred bird in flight that was caught on camera.

Flying birds snapped out of focus have been responsible for hundreds of historic alleged UFO photographs.

They are known as a blurfo.

He told Express.co.uk: “About the picture, watching the original source, I can say it’s most likely a bird.

“The shape taken during the bird’s flight is often mistaken for a UFO (blurfo effect) like a case I exposed two years ago.”

He provided details of an historic case that was exposed as a bird and images of birds in flight next to alleged UFO pictures to show the similarities.

Lightning Strikes Create a Strange Form of Crystal Rarely Seen in Nature : ScienceAlert
Orcas Are Contaminated With a Forever Chemical Associated With an Unlikely Product : ScienceAlert
Scientists Discover a Weird New Form of Ice That May Change How We Think About Water : ScienceAlert
Astronomers Find What May Be a Habitable World 31 Light-Years Away : ScienceAlert
High-Fat Diets May Break The Brain’s Ability to Regulate Calories : ScienceAlert