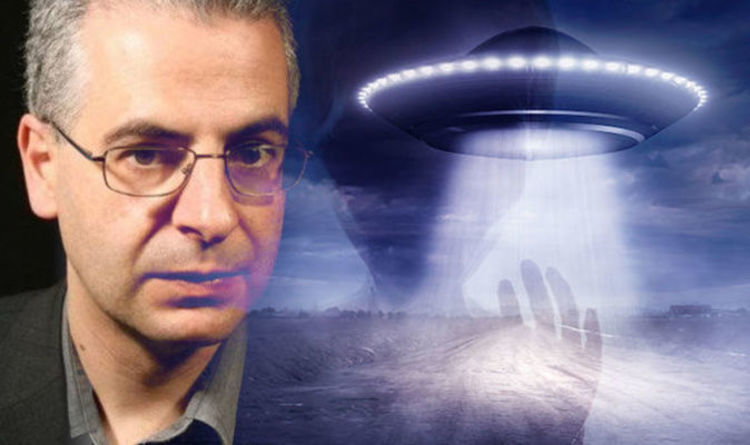 
In December the New York Times revealed details of a top-secret Department of Defense (DoD) prorgamme to investigate any threat from UFOs that ended in 2012.

The report about the DoD £16 million Advance Aerial Threat Identification Programme (AATIP) also astonishingly claimed that the material, that was said to be “unknown to science” following tests, was stored in buildings modified by a private aerospace company which was paid huge amounts of money by the DoD to research the phenomenon and look after the “metal alloys.”

The AATIP was run by military intelligence official, Luis Elizondo, on the fifth floor of the Pentagon’s C wing.

The bulk of the money went to Bigelow Aerospace in Las Vegas, run by billionaire US businessman Robert Bigelow, who is also working with NASA to create a new expandable spacecraft.

However, no images have surfaced of the alleged material, nor have any details of where it was found, or any reports of tests carried out on it.

Ralph Blumenthal, one of the reporters who worked on the story, later clarified: “They have, as we reported in the paper, some material from these objects that is being studied so that scientists can find what accounts for their amazing properties, this technology of these objects, whatever they are.

“It’s some kind of compound that they don’t recognise.

“We printed as much as we were able to verify. Can’t go beyond that.”

After a number of claims about the accuracy of the report emerged, Nick Pope, who previously investigated the potential threat posed by UFOs for the British MoD, came forward to back the report’s claims.

Although his enquiries in the 1990s revealed no such threat existed, and no metals were found in the UK, he is convinced mystery metal is being stored in the US.

Speaking exclusively to Express.co.uk, he said: “The recent revelations about the Pentagon’s UFO project are all true.

“The project existed and was funded to the tune of $22 million.

“Some of the personnel involved with this project came to believe some of the objects were extraterrestrial.

“There are recovered “materials”, the full details of which have yet to be disclosed.”

We asked Mr Pope how he could be so certain that the metals existed and were in storage.

He said: “As to how we know these alloys exist, there are two points.

“Firstly, Luis Elizondo has clearly told the New York Times and others about this aspect of the AATIP project.

“Secondly, the original New York Times article on December 16 states that the paper saw contracts relating to the project, maybe as a result of Freedom of Information Act requests, but possibly as a result of material having been passed to them by Luis Elizondo or by someone else associated with the project.

“The implication in the New York Times article is that the alloys were mentioned in one of these contracts, which would have had to have contained some breakdown of how the money was going to be spent.

“A specific expense seems to have been the modification of some Bigelow Aerospace buildings to store these alloys and other UFO-related materials.”

He described the New York Times fact-checking process as “meticulous.”

He added: “They were obviously very, very sure about this aspect of the story.

“As I’ve said previously, there are various tests that can be done on alloys, and clearly these tests will have been done.

“The results will be known. It’s just a question of whether the fact that these tests were done for AATIP but carried out by Bigelow Aerospace is sufficient to keep the results outside the scope of the US Freedom of Information Act.

“We don’t know how these alloys and other materials were obtained.

“We’re told they relate to UFOs, and if they come from some sort of military encounter, this is potentially very significant.

“However, we also know that Bigelow Aerospace acquired all sorts of UFO-related materials from civilian UFO research groups such as the Mutual UFO Network (MUFON).

Mr Pope said: “Imagine a scenario where a farmer sees a UFO over his cow pasture, and later found some bits of metal in the field.

“He assumes – maybe wrongly – that it’s connected with the sighting, and gives it to a UFO investigator.

“Subsequently, it’s acquired by Bigelow Aerospace and ends up as part of the AATIP project.

“If this is the sort of way in which these materials became part of the AATIP project, then they might not be exotic or significant at all.”

Richard Sachleben, a retired chemist and member of the American Chemical Society’s panel of experts, is not convinced.

He told Live Science. “My opinion? That’s quite impossible.

“There are databases of all known phases [of metal], including alloys.

“There are no alloys that are sitting in some warehouse that we cannot figure out what they are.

“In fact, it’s pretty simple, and any reasonably good metallurgical grad student can do it for you.”

May Nyman, a professor in the Oregon State University Department of Chemistry, said the databases include straightforward techniques for identifying metal alloys.

He said If an unknown alloy appeared, it would be relatively simple to figure out what it was made of.

We Just Got Our Closest View of Europa in 20 Years, And We Can’t Stop Staring : ScienceAlert
Still Short of Breath? Here Are 3 Ways COVID-19 Can Damage Lungs Long Term : ScienceAlert
Ancient Maya Cities Appear to Have Been Riddled With Mercury Pollution : ScienceAlert
Amazing New Fossils Provide Earliest Known Traces of The Evolution of Our Jaws And Limbs : ScienceAlert
Engineers Gave a Car a Pair of Eyes to Make Future Roads Safer For Pedestrians : ScienceAlert