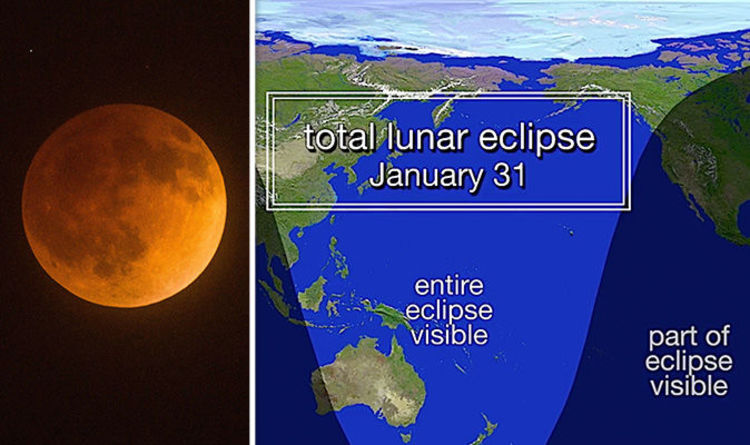 
The super blue blood moon is expected to be a combination of three major lunar events: a blue moon, a supermoon and a total lunar eclipse.

A Blue Moon is rare enough – it only rises once every two-and-a-half years – but the last Blue Moon Total Eclipse tandem was witnessed 150 years ago. Now it is joined by a Supermoon and Blood Moon.

Footage from NASA shows the USA West Coat will be in an advantaged position to catch the initial phase of the super blue blood moon in the early hours of January 31.

NASA said: “A great total lunar eclipse favours the Western US, Alaska and Hawaii and British Columbia on January 31.

The initial phase of the “lunar trifecta” is expected to begin at around 5.51am Eastern time.

The super blue blood moon will also be visible throughout the Pacific Ocean and Australia.

NASA predicts the moon will be close enough to Earth to be categorised as a supermoon while also being the second full month in January.

Passing through Earth’s shadow, the moon will also assume a peculiarly darker tone which will make it appear red to the eye of sky watchers.

NASA program executive Gordon Johnson said: “The best view of the super blue blood moon will be in the West.

“Set your alarm early and go out and take a look.”

Mr Johnson continued: “Your best opportunity if you leave in the East is to head outside about 6.45 am and get to a high place.”

“There will be one more lunar eclipse this year but it will be visible only from central Africa and central Asia.”

Shimmering ‘Lakes’ Under The South Pole of Mars Might Be Something Else Entirely : ScienceAlert
These Are The Most Distant Star Clusters Ever Seen, And We Nearly Missed Them : ScienceAlert
Wolves Really Can Become Attached to Humans Like Dogs Can, Adorable Study Finds : ScienceAlert
The Tonga Eruption’s 50 Million Tons of Water Vapor May Warm Earth For Months to Come : ScienceAlert
Hubble And Webb Pics Reveal DART Impact Was Even Bigger Than Expected : ScienceAlert