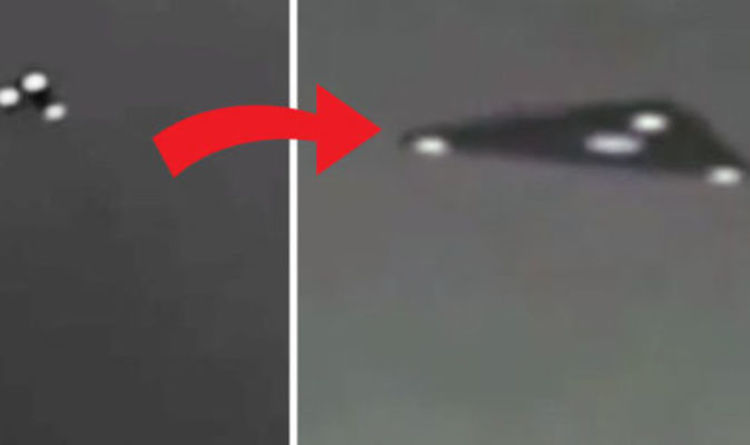 
In the clip, the bizarre object can be seen soaring through the sky at pace.

Moving from left to right, the UFO appears to be flying backwards.

As the video zooms in on the phenomenon, it seems to reveal a triangular-shaped craft, with three lights on each point.

The footage was uploaded to YouTube channel UFO Today and has quickly gained popularity after only being posted for a few hours.

The description read: “On the 26 of January this amazing video was shot from a dashboard camera.

“The footage captured a TR-3B UFO in mid-air and it might be the best evidence ever of the TR-3B UFO ever.

“The triangular object is coming in from the left of the screen and you can see that this object doesn’t have any blinking lights like a normal airplane should have.

“It is flying at a very low altitude which is very strange for a normal airplane.”

The TR-3B is the name conspiracists have given to the alleged surveillance aircraft of the United States Air Force, speculated to be developed under a so-called black project, which are said to use money unaccounted for in official government budgets.

The TR-3B is alleged by conspiracy theorists to be a secret “black project” spy craft of the US government that can be flown into space.

Some alien hunters believe they are the motherships of extraterrestrials visiting Earth.

However, many conspiracy theorists believe they are actually secret aircrafts developed by the US Air Force (USAF) which are being tested, Dailystar.co.uk reports.

The allegations are that these crafts are created at top-secret military bases such as Area 51 in Nevada, by reverse engineering alien technology.

And viewers believe the latest video is confirmation the craft is in use.

Some viewers of the video were convinced it could be genuine.

One posted on YouTube: “I believe this to be reversed engineering from NASA or the Military Industrial Complex.

“Most objects we see in our skies nowadays are human made, but there is a small percentage that are unexplained.”

There is no real evidence to back up the existence of the TR-3B apart from eyewitness accounts and dubious inconclusive videos.

However, hundreds of triangle UFO sightings are reported each year with eerily similar descriptions.

Many of the videos of alleged TR-3Bs have proved to be CGI fake footage or misidentified planes.

He told Express.co.uk that the landing lights of planes could appear to make a triangle shape when filmed at night.

He said that due to anomalies with the “motion tracking” of the latest video, he believes it is a hoax.