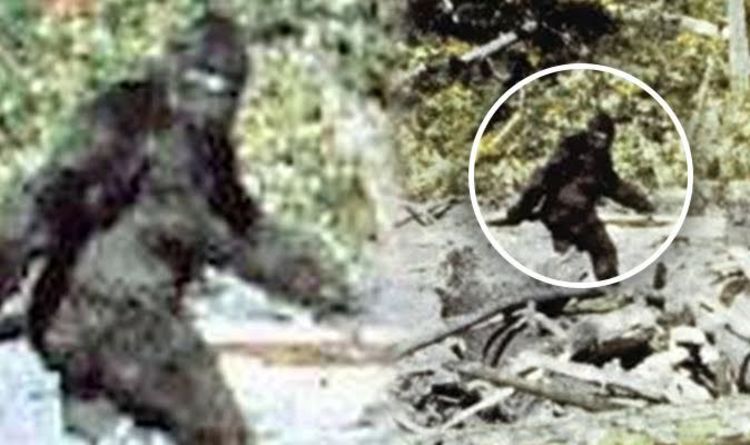 
The contentious clip was first released in 1967, sending shockwaves across the globe after the filmmakers claimed this shows the first-ever footage of a female Bigfoot.

Roger Patterson and Robert “Bob” Gimlin shot the video in a remote area of northern California, maintaining that the shaky clip was completely genuine for years after the event.

Footage shows a giant gorilla-like creature striding across the woods, but standing upright like a human, before turning around and glaring at the camera.

The Bigfoot or Sasquatch myth says a mysterious species of ape men, which walk on two legs, roams the US wilderness – in the same way that the mythical Yeti is said to in the Himalayas.

In the stabilised video, after a couple of moments, the beast quickly disappears from view into the thick undergrowth.

Clearer pictures of the creature show the alleged Bigfoot walking with a similar stride to a human.

One Reddit user said the digital enhancement only proved it was fake.

He said: “I’ve never seen something look more like a man in a costume.”

Another said: “This makes this clip absolutely laughable.”

A third said: “I must have seen the original video a bunch of times already.

“Sometimes I wondered if it was real or fake. Now that I’m seeing this – it feels kinda fake.”

The original video was widely branded a fake in January 1999, when Bob Heironimus – an accomplice of filmmaker Roger Patterson – claimed he was the man inside the gorilla suit.

He said in a press release: “I’m telling the truth. I’m tired after 37 years.”

Some people were still clinging onto the possibility it is real.

One said: “It’s spooky. On an old CRT display with the original clip, that part where Bigfoot glances at you is bone-chilling.”

Viagra Linked to Much Lower Risk of Death in Men, But Questions Remain : ScienceAlert
There’s a ‘Lost City’ Deep in The Ocean, And It’s Unlike Anything We’ve Ever Seen : ScienceAlert
Bacteria Can Use Plastic Waste as a Food Source, Which Isn’t as Good as It Sounds : ScienceAlert
Mysterious ‘Zone of Uncertainty’ Inside The Brain Reveals a Surprise : ScienceAlert
Scans of Mummified ‘Golden Boy’ Reveal He Was Covered in Magical Protections : ScienceAlert