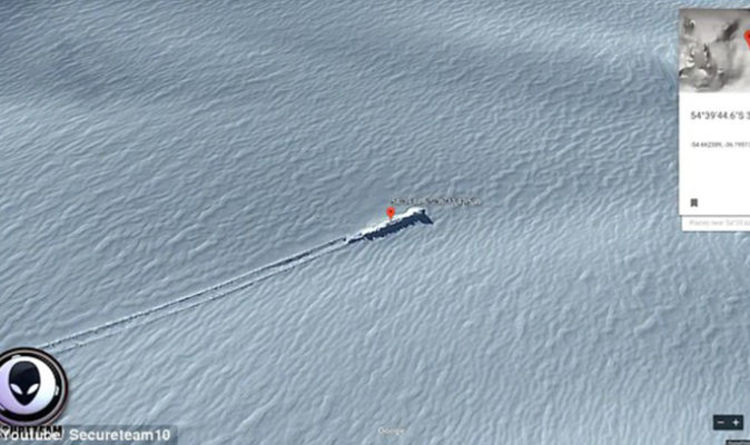 
Website Secureteam10, which investigates alleged UFO sightings, made the claims in a video uploaded to Youtube, using satellite mapping to zoom in and look at the alleged spaceship, near the 10,000ft tall Mount Paget.

Nearby tracks suggest the irregular-shaped object had slid through the snow prior to arriving at the final resting place on the icy island, not far from Antartica.

Since it was uploaded to the site on Friday, the video has been viewed more than 420,000 times, attracting almost 6,000 comments.

Some agree this could be an alien spaceship. Frank Lucas wrote: “That definitely looks like something was airborne and definitely crashed into that mountain.”

Meanwhile James Carter said: “The Georgia island object is definitely not anything we can explain from looking through satellite imagery.”

Another Youtube user, Tom Brown, suggested: “This could actually be a rocket or the left overs of a rocket. It could also be a missile that was fired for testing purposes.

“It could even be a human-made airplane or aircraft of some sort.

“Governments all around the world do all kinds of testing with air crafts for modern warfare and the perfect place to hide one that didn’t work out would be on a small island that is near a continent no one is allowed to explore.”

However, others suggested this was a piece of rock which had been pushed along from a nearby glacier, while many did not take the claims seriously.

Secureteam10 refers to itself as “the fastest growing research outlet and source for data’ on aliens and UFOs”.

Its Facebook page is followed and liked by almost 165,000 people. It describes its mission as “exposing the alien cover up, one leak at a time”.

Incredible ‘Fairy’ Robot Sails on The Breeze Like a Floating Dandelion : ScienceAlert
Astronomers Find What May Be a Habitable World 31 Light-Years Away : ScienceAlert
We Used to Hate Commuting. Now We Realize We’ve Lost Something. : ScienceAlert
Ancient Goo Spills The Secrets of How The Egyptians Mummified Their Dead : ScienceAlert
Orcas Are Contaminated With a Forever Chemical Associated With an Unlikely Product : ScienceAlert