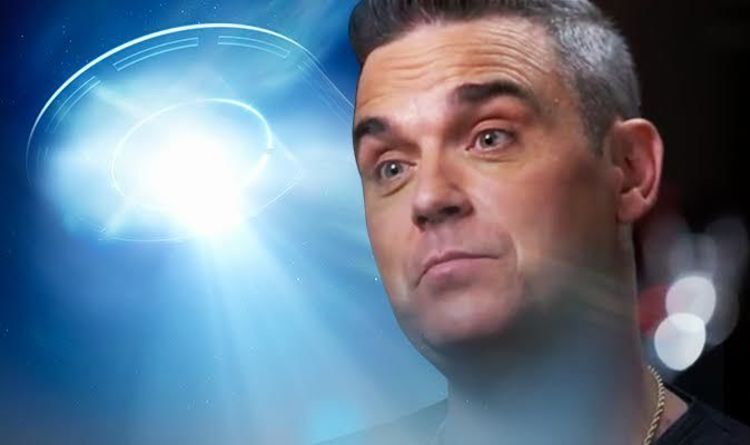 
He revealed the close encounter of the third kind in a revealing interview with Australian show 60 Minutes.

Instead of his usual colourful tales of his wild alcohol and drug-fuelled party days, Robbie came clean about the extraterrestrial encounter.

He said: “I’ve seen one right above me. If I got a tennis ball out I could have hit it

Robbie, 44, claimed all of his close encounters have come in Britain and the United States, describing them as “intriguing and powerful”.

Clearly shocked, journalist Liam Bartlett hit back, saying: “Hang on. For the record, no substance was involved?”

Robbie replied: “No, no substance was involved at all.”

And this is not the first time Robbie has recounted the tale.

Last year, he told Irish radio: “I’ve had a UFO right above my head, totally sober.

Robbie is currently on the mend after a health scare in December that forced him to cancel his final two European tour dates.

Yesterday, he revealed that he now prefers being called Rob, rather than his “showbiz name” Robbie.

He has yet to give details of the size or ship of the UFO he saw, or even location, but no doubt UFO investigators will be keen to know more.

The singer is also not the only 1990s northern music sensation to claim to have seen a UFO at close hand.

In 2015 Madchester legend Shaun Ryder told how he came face to face with a huge UFO hovering over his back garden.

The Happy Mondays and Black Grape lead singer claims he was not tripping on magic mushrooms or other hallucinogenics when a 20ft by 10ft flying saucer appeared over him in South America.

And The Beatles legend, the late John Lennon once told how he was with his secretary May Pang at his New York apartment on August 23 1974 when a flashing UFO appeared.

A New Method Has Been Enlisted to Help Save Elephants, And It Involves Space
A Physicist Has Worked Out The Math That Makes ‘Paradox-Free’ Time Travel Plausible
How to Have a COVID-Safe Car Ride, According to Science
Giant Predatory Worms Once Roamed The Ancient Seabed, Scientists Say
The First People to Settle in The Americas Brought Their Dogs With Them