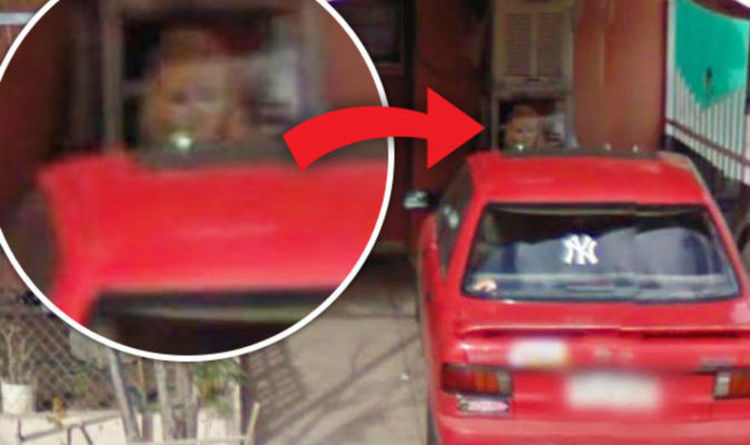 
The chilling image was taken by Google in the town of Delicias in the Mexican state of Chihuahua.

Ghost chasers spotted what looks like a blonde girl, who resembles disturbing images of dolls from horror films, behind a red car.

The “ghost child” appears eerily pale and with her dark eyes fixed on the camera.

And the image has since been shared widely online on paranormal and social media websites, generating numerous theories about the girl’s origin and why she is seen there, Dailystar.co.uk reports.

One viewer of a video about the Google Maps image posted on YouTube: “That is so creepy – is it a ghost?”

Another said: “I would be straight in that car and out of there if that popped up!”

But sceptics said it is probably just a doll or a poster of one pinned to the door in front of the red car.

Because the camera has not focussed on this, it appears blurred and is much harder to distinguish.

However, it has not stopped furious speculation that it could be a genuine phantom.

Sceptics claim images of suspected ghosts in pictures, are often nothing more than optical illusions or the effects of pareidolia when the brain tricks the eyes into seeing familiar objects like faces in textures or patterns.

Another problem for genuine ghoul hunters are so-called ghost apps.

These allow mischievous mobile phone users to add a realistic looking ghost into their own photographs and then post them online as possible proof of ghosts.

In 2015 Express.co.uk exposed how one cheeky night worker had added a ghost app into a picture he took inside a hospital which was then sent into newspapers as a genuine mystery.