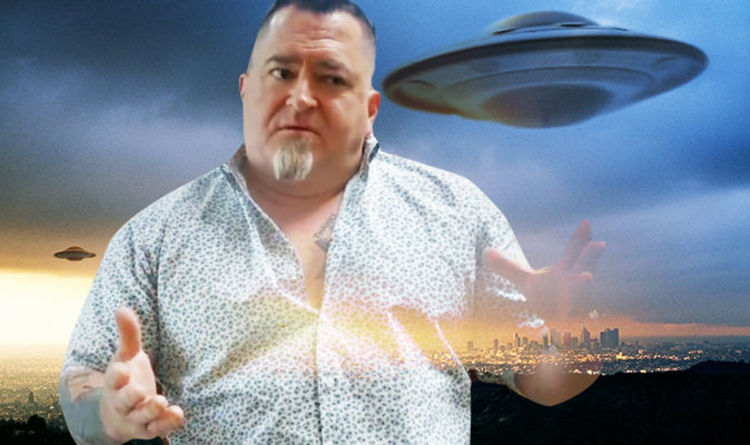 
In December, a New York Time article revealed details of a top-secret £16 million US Pentagon study into the potential threat posed by UFOs.

The report claimed the Department of Defense (DoD) Advanced Aerospace Threat Identification Programme (AATIP) even recovered “unknown alloys” believed to have come from a UFO that had been tested and found to have properties unknown to science.

The project was run by military intelligence official, Luis Elizondo, on the fifth floor of the Pentagon’s C Ring.

He has revealed two former classified videos of suspected UFOs that were looked at, but nothing to confirm the metal actually exists.

However, he has given an exclusive interview to the organisers of the UFO Congress, which is the world’s biggest UFO conference, and took place in….on….

Alejandro Rojas, host of the UFO Congress said Mr Elizondo had told him more about the metal during the exclusive interviews that were screened at the event.

Mr Rojas said: “I can tell you it is not an alloy like the New York Times claims.

“I shared at our conference that Elizondo has told me it is a ‘meta material’ with strange isotopic values indicating it is not from earth.”

A metamaterial is a material engineered to have a property that is not found in nature. They are made from assemblies of multiple elements fashioned from composite materials such as metals or plastics.

No other details have so far surfaced, with some people claiming the materials were provided by UFO investigators, and others believing they were recovered by the government.

Mr Elizondo said in the interview: “The question is do they come from outer space or inner space or somewhere in between. I don’t know.

“The data we have been seeing is so advanced it is hard enough for us to replicate our observations with our understanding of quantum mechanics. But for this type of technology to be available when we first started seeing it, I think is beyond improbable, I’m not going to say impossible, but I think it is really, really unlikely to come from another country like Russia or China.

“It leads to the next quest if it is not ours and not theirs, then whose is it?

“I don’t know whose it is and that is why we are asking the questions and why we did what we did for the last 10 years and why we need to continue doing what we are doing because we need to ask those questions.

The bulk of the money allocated by the DoD for the project reportedly went via a contract to Bigelow Aerospace in Las Vegas, run by billionaire US businessman Robert Bigelow, who is also working with NASA to create a new expandable spacecraft.

Last May, Mr Bigelow stunned the world by declaring during an interview with prime time CBS current affairs show 60 Minutes intelligent aliens are secretly living on Earth, and the government knows.

The report claimed under the billionaire’s direction buildings at the company headquarters were “modified” to allow the storage of the materials.

However, no images have surfaced of the alleged material, nor have any details of where the objects was found, or any reports of tests carried out.

No further details were released at the time about where they were found, how many there are, or what happened to them.

It also does not appear any official reports on the materials have been released,

Express.co.uk asked Mr Rojas why there had been no release of the material, or images or further details.

He did not directly respond, but said: “I find Mr Elizondo to be genuine, and although some UFO researchers feel we should be careful to trust a government insider with a background in intelligence, the revelations he has shared thus far are extraordinary.

“Many have been skeptical of Nick Pope, who held a similar position as Mr Elizondo in the UK Ministry of Defence, but Nick has turned out to be invaluable in legitimising the need to investigate UFO cases, and I believe Elizondo will prove to be the same.”

The SETI Institute is a collective of scientists looking for evidence of alien life in the cosmos.

Show host Seth Shostak said more details should be given on the material and what exactly was done to the buildings to store the product.

He said: “Why would the government give the material to business entrepreneur Robert Bigelow, why not to science experts in atmospheric physics or even aviation?

“Look people have been clamoring for physical evidence for decades. If that evidence is stacked up in some buildings in Las Vegas, let’s open the doors.

“At the moment the promise of exotic artefacts in storage is nothing more than that.”

Fellow host Molly Bentley said: “Why aren’t the artefacts from unidentified aerial phenomena in his building being made available to material scientists or other researchers for study.

“If the evidence isn’t released, no one can evaluate it.”

Express.co.uk has approached Mr Bigelow through Bigelow Aerospace to try to find out what happened to the material.

We have also contacted Mr Elizondo through To The Stars Academy, asking if they know what became of the materials.

We await responses from both.

Our Body Temps Have Been Dropping For 160 Years. Gut Microbes May Be Playing a Role : ScienceAlert
Intriguing Meteorite From Mars Reveals ‘Huge Organic Diversity’, Scientists Say : ScienceAlert
Mysterious ‘Zone of Uncertainty’ Inside The Brain Reveals a Surprise : ScienceAlert
Lightning Strikes Create a Strange Form of Crystal Rarely Seen in Nature : ScienceAlert
This Physicist Says Electrons Spin in Quantum Physics After All. Here’s Why : ScienceAlert