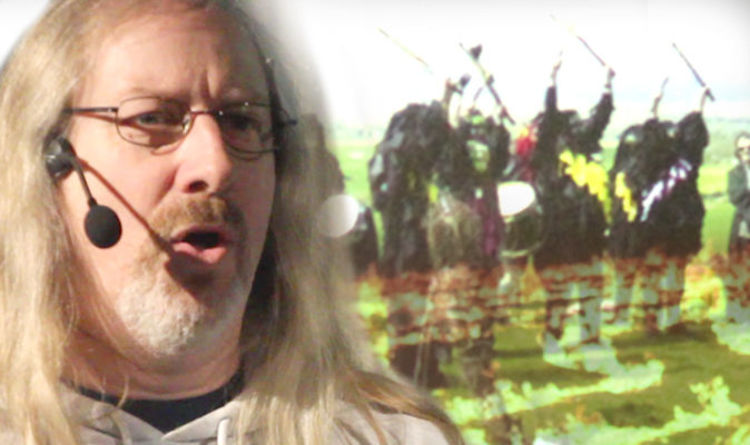 
No one was harmed during the ritual, which was part of a weekend of celebrations of the Samhain festival, held every autumn, but the experience has been with some for years since, he said.

Samhain, pronounced ‘sow’inn’, is the Feast of the Dead in the Pagan caledar, and a time when the veil between our world and that of the dead is said to be at its thinest.

The festival is said to have morphed into Halloween.

Damh explained how during a workshop the participants were supposed to be taken as close to the Underworld – the land of the dead – as possible.

According to Pagans there is also an Upperworld of the Gods and the Middleworld where we inhabit.

To set the scene, the organisers lit a huge fire based on the Cretan maze from Greek mythology.

The group was asked to “sit in circle” under a large ash tree, before they were led away one by one.

Damh said: “A black-robed traveller approached the circle and invited one to take his hand.”

Each person was led towards a doorway draped in animal skins.

Damh said: “They could hear a drum gently beating inside and were told ‘you are at death’s door’. No one ran away.

“They reached forward and opened the skin door and inside was a figure dressed as a raven gently hitting a drum.

“When they were inside the skin doorway closed.

Damh then described in detail his mock sacrifice.

He said: “I stood from behind and slowly dragged my nail across the skin of their neck.

“Without exception they all dropped down.”

The “victims” were then taken by other people to an area of darkness to be lain down.

He said: “This was to sleep the sleep of the dead.”

When they were finally woken from their “near death experience” they had to crawl through a 20-feet long pitch-black tunnel draped in animal skins to get out.

Some of the participants were said to be in tears when they came out.

He said: “One person did not want to go back, but in the end they did.

“It made them see the veil between life and death and stayed with them for many years.”

Damh recounted the event from September 2003 at a farm, near Lewes in East Sussex, at the annual Occult Conference in Glastonbury, which was themed on sex and death.

He said: “Why did we do this? Why do we have such a fascination with death?

Damh said it was because we all know one day we will “go through the veil.”

The bard said he once put on two workshops – one based on love, peace and contentment and the other on death and the afterlife and the second was a sell out.

As Pendragon of The Order of Bards, Ovates & Druids, Damh the Bard is one of the most senior members of the UK’s longest-running druid organisation, which is involved in the Summer Solstice celebrations at Stonehenge.

Since 2000 the order has been putting on Pagan rituals at the site of The Long man Chalk Figure in Wilmington, East Sussex.

Between 60 and 120 people join to celebrate Samhain, Beltane at spring time and other events from the Pagan calendar.

Scientists Create Shapeshifting Humanoid Robot That Can Liquefy And Reform : ScienceAlert
People Who Don’t Exist Look More Real Than Actual People, Study Finds : ScienceAlert
Babies May Not Be Born With a Microbiome After All, Scientists Say : ScienceAlert
‘Funky Worm’ Fossil Helps Explain The Mysterious Origins of Amphibians : ScienceAlert
Our Body Temps Have Been Dropping For 160 Years. Gut Microbes May Be Playing a Role : ScienceAlert